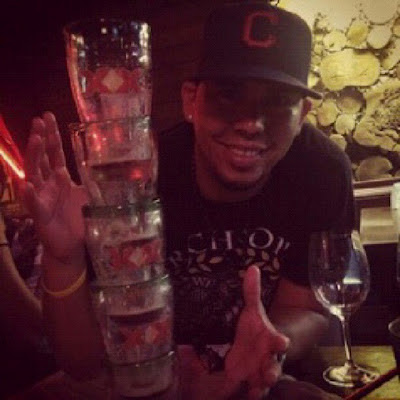 Hey there.  You see that guy up there?  Yup, that's my brother.  He posted this pic on Instagram not too long ago and I thought it was hilarious.  Not so much the pose or any thing like that.  It's the fact that we were at the same place, The Downey Brewery, earlier that week my brother was irked that he wasn't invited.  lol  So in retaliation, he sent this pic to show my friends and I, "how he does it."  lol  Yeah, we're awesome like that.  The last time my brother and I were both at The Downey Brewery at the same time, we each had about 6 boots (28 ounces of beer per boot!) and the wife had banned me from setting foot at the Brewery again.  lol  Yeah, that happened.

Anyways, it's always a fun time when I'm hanging with my bro so here's a little shout out to the only sibling I have, my lil brother.  *Cheers*  Later!
Posted by Metallman at Sunday, August 05, 2012