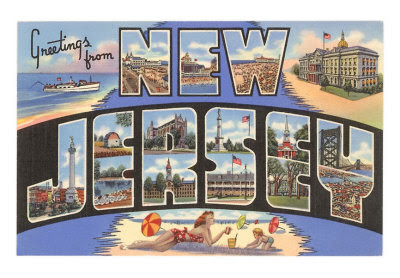 Hey there.  Earlier this month, the wife and I enjoyed a vacation during our anniversary.  When we do get some free time to ourselves, we end up going somewhere local.  Somewhere close to Southern California where we can easily drive to and from.  Where did go this time around?  We went to Las Vegas.  Don't get me wrong, it was fun and we had a great time, but you know what... we've done Vegas before.  We've done San Diego.  We've done Laughlin.  We need to head out to the East Coast.  We need so check out what the  Eastern shore has to offer.  While there are some more glamorous spots out East like New York, I've heard that Central New Jersey may be the place to see.
So why New Jersey?  First off, because it's different for a born and raised California guy like myself.  For someone that has rarely left California, I would love to check out the sites that New Jersey has to offer.  Especially something spectacular like the Balloon Festival.  I've only seen one hot air balloon in my life that thing was not open to the public.  It was tied down and you could only check it out from afar.  But the Central New Jersey Balloon festival is open to the public and the sky fills up with hot air balloons.  How awesome is that?  Imagine just hanging out on a grassy field for a few days in July and have the sky fill up with wondrous colors!  The kid in me would definitely want to check out.

And for the musician in me?  I would love go an catch an outdoor concert at the PNC Bank Art Center.  I love to catch live musical acts and it really doesn't matter what the music style is to me when it's a live band.  I would enjoy anything from an orchestra to a hip hop show.  Metal to jazz.   It won't matter to me as long as the music resonates through the air.  I've always been attracted to a live musical act and I can picture the wife and I having a great time outdoors and enjoying some great music.
We've already had a short summer vacation, but that doesn't mean that we're not already looking for destinations for our next vacation.  We're ready for something different, for something new, and our good friends at Go Central Jersey may just have what we're looking for.  So let's hear it, friends.  Have any of you visited Jersey?  What do you recommend we check out if we do end up going?  A guy like me also loves to eat so I would love to hear how the cuisine is Jersey looks like.  Later!
Posted by Metallman at Thursday, July 26, 2012