Thoughts On... The Thunder Beating the Heat in Game 1 of the NBA Finals

Hey there.  Tonight the NBA Finals tipped off.  The Oklahoma City Thunder are set off to go against the Miami Heat.  This should have been a Celtics Vs Lakers finals but those two teams bowed out a little earlier than expected.  The Heat outplayed the Celtics in their 7 game series and Thunder took it to the Lakers and took them out.  Anyways, this is not a post about coulda, woulda, shoulda... this is about the Thunder taking game 1 from the Heat and why Miami should worry.  After watching the first game of this series, thoughts came to mind and here they are.  My thoughts on... the Thunder taking out the Heat in game 1 of the NBA Finals.

During the 1st qtr, I was surprised by many things.  First, I took me by surprise how well the Heat came out shooting and moving.  They must have had 4 or 5 three point shots in that qtr.  They came out shooting well and moving the ball well.  They were able to build a double digit lead within minutes of the game!  The second thing that surprised me was how flat the Thunder looked.  They are the younger team and the more rested team.  I was expecting them to come out of the gate firing and taking it the Heat.  That didn't happen.  The only one who had a decent first qtr was Kevin Durant and after the qtr ended, they were lucky to be down 7 and not significantly more.  And lastly, what was the Heat coach, Erik Spoelstra thinking taking out his hot shooter, Shane Battier, out of the game when they were on top.  I'm not a fan of the Heat coach.  I feel as if he's just winging it most of the time and hopes that the Heat Big 3 can win games for him.  By taking out Battier, you risk your bench player to get cold and you risk letting the Thunder back in.  I thought that move was a huge mistake on Spoelstra's part.  Shane hit 3 or so 3 pt shots in that first qtr and clearly helped gain momentum for the Heat.
One thing I know about the Thunder is that they have one great run in them in the second half.  They are just a different team once halftime is over.  The Heat were up at the half by 7 or so and I told myself it was not enough.  The Thunder definitely turned it on and took the lead by the end of the 3rd qtr.  Once that happened, I knew the Thunder would win this game.  Why?  Because LeBron does not have a 4th qtr.

Where was LeBron James during that 4th qtr?  Where is the LeBron that single handed beat the Boston Celtics in Game 6 and 7 in the Eastern Conference Finals?  Once again, he skipped the 4th qtr in one of the most meaningful games of his career.  I remember the graphic on the screen with 2:30 left in the game showing that LeBron was 1-8 for only 2 pts.  2pts in the first 9 minutes of the 4th qtr is not going to cut it!!!  For someone that needs a ring to "validate" himself, he sure isn't helping by continuing to take the 4th qtr off.  What is it?  It's an enigma.  He has shown the ability to take over games but once the pressure of the NBA Finals is on, he seems to hide out and not show up in the 4th qtr.  It's completely baffling.

Now, I know the whole world is beating down on LeBron James.  And you know what... rightly so.  LeBron brought all this scrutiny to himself, proclaiming himself "the king", having "the decision", gloating over championships he's going to have, and having some poor sportsmanship decisions.  I'm sure that we can all agree that the man is a beast athletically.  A fine physical specimen with uncanny basketball abilities, but man does his character rub me the wrong way.  I am one of those guys that is looking for him to lose.  Not because he doesn't deserve to win, but because I'm hoping that it will be a humbling experience for him and will help mold better characteristics in him. 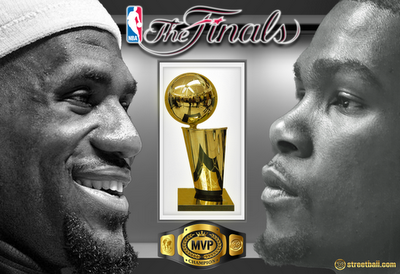 And lastly, there is the individual battle between Kevin Durant and LeBron James.  I'm sorry LeBron but Durant is the better player.  After showing is strong leadership and great play making abilities throughout the NBA Playoffs, Kevin Durant was money once again in the 4th by scoring 17 pts in the qtr!  This Kevin Durant kid is scary good and he's still in his early 20s.  Even though LeBron has shown improvement in his game and leadership skills, he just can't seem to pull it together at the end of the game.  His 4th qtr Finals performance have just been abysmal and if the Heat are to have any chance against this young and hungry team, they're going to need LeBron to pull it together for a full 48 mins.  Later!
Posted by Metallman at Tuesday, June 12, 2012