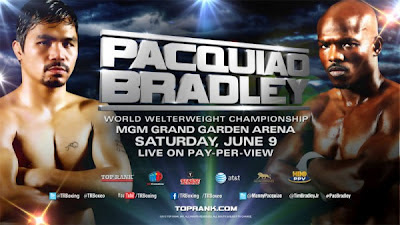 Hey there.  On June 9th, the sport of boxing took a huge blow.  Manny "Pacman" Pacquiao went up against the undefeated Timothy Bradley in a match that was to test the skills of Bradley against a superior opponent.  Very few gave Bradley a chance.  As the announcer, Max Kellerman, said this is a fight between a good fighter and a great fighter with Pacquiao being the great fighter.  After 12 rounds of boxing, a decision had to be made, but in the eyes of everyone watching the fight, Pacquiao won in a landslide.  That is.. everyone but the 3 judges judging the fight.  In a shocking decision, Timothy Bradley defeated Manny Pacquiao by a split decision.  A decision that not only rocked the sporting world, but rocked all social media as well.

First off, I was a little upset about Manny's lack of professionalism.  The fight was to start AFTER the Heat/Celtics game so the fight was a bit delayed.  Manny didn't help matters much by NOT being in his locker room waiting to get it on.  He was off on a treadmill nowhere near ready during the scheduled start time.  It was almost as if he didn't respect Bradley and was taking this fight lightly.  Manny, being undefeated for the past 7 years or so, should have shown a little more poise and respect for his opponent. Because he didn't, Manny definitely lost some points in my book.

Then, there was the fight itself.  Once things got rolling, it obvious that Manny was the better puncher and better boxer.  He was just too quick for Bradley.  Manny continuously pounded Bradley's face with his killer straight left and on more than one occasion, it seemed like it rocked Bradley enough that he was ready to take a fall.  Manny so much quicker and stronger that he landed almost twice as many punches as Bradley and looked like a he gave him a beating on each and every round.  Manny was so confident that it looked like he would take the first minute or so of the round off.  He would just circle Bradley, dodge his punches, and then during the last minute he would go to work, landing several strong punches and keep Bradley on his heels.  Manny was so dominant that by the end of the fight, I respected Bradley's chin more.  That face of his took such a beating that he should have hit the ring more than once and he didn't.  Manny is a power puncher and it was surprising that he didn't hit the ring.
Now... I want to mention the corners.  I found it interesting that Manny's corner spoke Tagalog (you pronounce it like "Ta-gah-low" Max!) almost exclusively.  Now, I'm sure that Manny would speak his native tongue more with his trainers, but usually there's an interpreter for the viewers.  I might be wrong, but I do NOT remember hearing much in translation.  Why?  Hmmm...  And then there was Bradley's corner.  His trainer sweared like there was no tomorrow, but what I found interesting is that he seemed more concerned with Bradley SURVIVING the fight.  I've watched many boxing matches and I've heard trainers talk strategy.  Avoid the left, keep your arms up, watch the counter.  Things of that nature, but that's not what I heard from Bradley's corner.  I heard more things like, "you have 5 more to go."  In between the trainer counting down til the end of the fight, there was a DEFENSIVE advise.  DEFENSIVE ADVISE?!?!  Why would you want your fighter to survive til the end?  Don't you want them to win?  Don't you want them to knock the other fighter out?  Why play the defensive card when it clearly looks like you are being dominated?  See, I would figure that if someone is clearly dominating, I'm going to throw everything I got.  I'm not going to block as much as I'm going to throw a few hay-makers and Bradley wasn't throwing as many hay-makers as he should have.  It just seemed like Bradley's corner knew something that we all didn't.

Once the decision was announced, EVERYONE was shocked.  Everyone except for Bradley's corner.  As a matter of fact, they hoisted their fighter on their shoulders and kept him up there.  Bradley threw his arms up as if he won the fight before the announcement.  I understand that there's pride in these fighters, but that pride would also humble you when you know you lost.  You're not going to parade yourself as the victor when your ass was handed to you.  Something just didn't seem right there.  I'm no professional, but I had Pacquiao winning about 10 rounds or so.  Once scores of 113-115 were being announced, I was a bit baffled.  I didn't think it was that close and felt that something just wasn't right.  Once Timothy won and Max had them for an interview, he asked Manny if he thought he won the fight.  Manny confidently said yes.  When Timothy was asked the same question, his response was, "I need to see the tape."  Are you kidding me?  Is that you admitting that you didn't think you won.  Are you passively admitting that other fighter bested you and there is a flaw in the judging?
Man, a lot of people were upset, and rightly so.  Facebook and Twitter quickly voiced their anger on Manny being robbed of this fight.  It would be an understatement to say that Bradley winning is an unpopular decision.  I am not a huge fan of Manny and I was hoping for an upset, but I don't want to see a boxer be cheated.  If he loses, he loses because his opponent was better.  On that night, the opponent got the best of him.  Congratulations are given and hopefully a rematch ensues.  This fight just didn't seem right.  As soon as Timothy was announced as the winner, a date for a rematch seemed premeditated.  Bradley was quick to offer a November date and get it set up for a rematch.  Really?  You have a date ready for a rematch?  I don't know.  Something is fishy here.

Manny won this fight.  It was as clear as day.  The sport of boxing received a black eye by giving the victory to Bradley.  Fights and rounds are left to 3 judges.  Their interpretation of what goes on in the ring will always have the final word on who wins and their decisions are final.  This is why many people have ditched the sport of boxing and have jumped into the world of MMA fighting.  3 rounds and it's real simple.  The guy that taps out is the loser.  The guys that is the bloodiest is the loser.  The guy that can no longer continue is the loser.  Is it more brutal, yes, but you know what else it is?  It's honest!  You cannot hide behind judges.  Either you dominate your opponent and show that you are the superior fighter or not.  This fight may have finally pushed away the last few loyal boxing enthusiasts.

Maybe if Pacquiao incorporated a little Wushu magic in his footwork, the outcome may have been different.  Don't know what I'm talking about?  Check out the Lion Dance Singapore's Wushu Team for an outstanding Wushu performance to find out more.  They're pretty awesome, actually.  But I digress.  So did you watch the fight?  What did you think of the decision?  Let's hear it in the comments, friends!  Later!