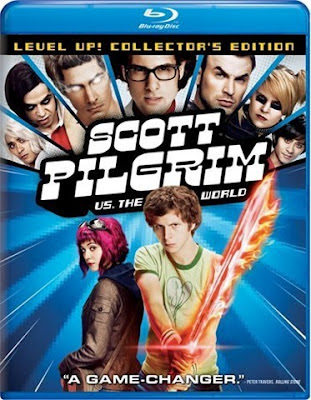 Hey there.  Who is ready for another movie giveaway?!  Geeks, nerds, and video game enthusiast will agree that Scott Pilgrim Vs. the World is the one movie that mashes all of what we like into one quirky film.  And now you can enter to win your own Blu Ray/DVD combo of Scott Pilgrim Vs. the World movie right here on Metallman's Reverie!  Here's a quick recap of the film:

Game on! Scott Pilgrim just met the girl of his dreams…literally. But in order for them to date, he must defeat her seven evil exes -- a rogues' gallery -- including an infamous skateboarder, a vegan rock star and fearsome identical twins! From the genre-smashing director of Hot Fuzz and Shaun of the Dead comes “a true original” (Entertainment Weekly) powered up by wit, action and groundbreaking visuals that you will want to watch again as soon as it’s over!

The giveaway will run until May 22nd and the winner will be announced on May 23rd.  I love the music and video game references in this film.  Maybe that's why it's on top of my list of guilty pleasures.  Best of luck, friends.  Later!
a Rafflecopter giveaway Can't wait to see if you've won?  You can score the flick for the awesome price below at Amazon!