The Girl with the Dragon Tattoo Blu Ray, DVD and Ultraviolet Copy Giveaway 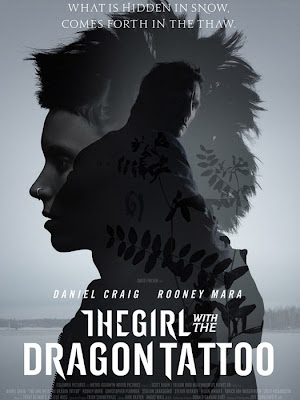 Hey there.  The Girl with the Dragon Tattoo is the first of the critically acclaimed trilogy by Stieg Larsson.  The Swedish version of the film is a great foreign film and the American adaptation starring Daniel Craig and Rooney Mara surpass it.  And now, you can win your own copy of The Girl with the Dragon Tattoo right here on Metallman's Reverie.  But not just the blu ray or the DVD copy, you are getting 3 copies of the film.  Blu ray, DVD, and the ultraviolet copy.  The ultraviolet copy is for computers and mobile devices and it's perfect for many of the small HD screens that many smart phones and tablets now have.  This will allow you not only enjoy the film on your TV but also when you're on the go.  How awesome is that?!?!?  Here's Amazon's description of the film:

A murder mystery rife with suspense, scandal, sexual abuse, and some supremely intriguing characters, The Girl with the Dragon Tattoo is an excellently crafted film adaptation of Stieg Larsson's equally fascinating book of the same name. Larsson's book was also the basis of a 2009 Swedish film (also with the same title), and while the Swedish film was good, this American version is far superior, thanks to fantastic cinematography and livelier pacing that results in a constant, electric tension that drives every second of the movie. The breathtaking footage of a snowy, remote island in Sweden thoroughly exudes bitter cold, and the attention to the smallest details, like the whistling of the wind through a door left ajar, makes the hairs on the back of viewers' necks absolutely prickle. Like the book, the film is long (158 minutes), there's an abundance of dialogue that is never awkward and always efficient, and there are plenty of false endings. The suspense and the intricacy of the mystery are stellar, and even viewers who know the story well will find themselves sucked into the riddle being investigated by journalist Mikael Blomkvist (Daniel Craig). The casting is great, as are the performances of all the key actors, but by far the best thing about this film is Rooney Mara, who is utterly believable as the incredibly strong, extremely disturbed Lisbeth Salander, Blomkvist's unlikely assistant. Mara's performance is chillingly real and completely riveting. Yorick van Wageningen is perfectly despicable as Nils Bjurman (though his scene with Salander is sure to prove highly disturbing to some viewers), Christopher Plummer is an effective Henrik Vanger, and Stellen Skarsgård is eerily frightening as Martin Vanger. Viewers can only hope that director David Fincher, screenplay writer Steven Zaillian, and actors Craig and Mara will continue their collaboration to produce films based on the final two books of Larsson's Millennium trilogy. --Tami Horiuchi


Best of luck, friends.  Giveaway will run until May 3rd and the winner will be announced on May 4th.
a Rafflecopter giveaway If you can't wait to see if you won, you can pick up the

Email ThisBlogThis!Share to TwitterShare to FacebookShare to Pinterest
Labels: Blu Ray, Free Stuff, Movie, The Girl with the Dragon Tattoo