Thoughts on... The Lorax 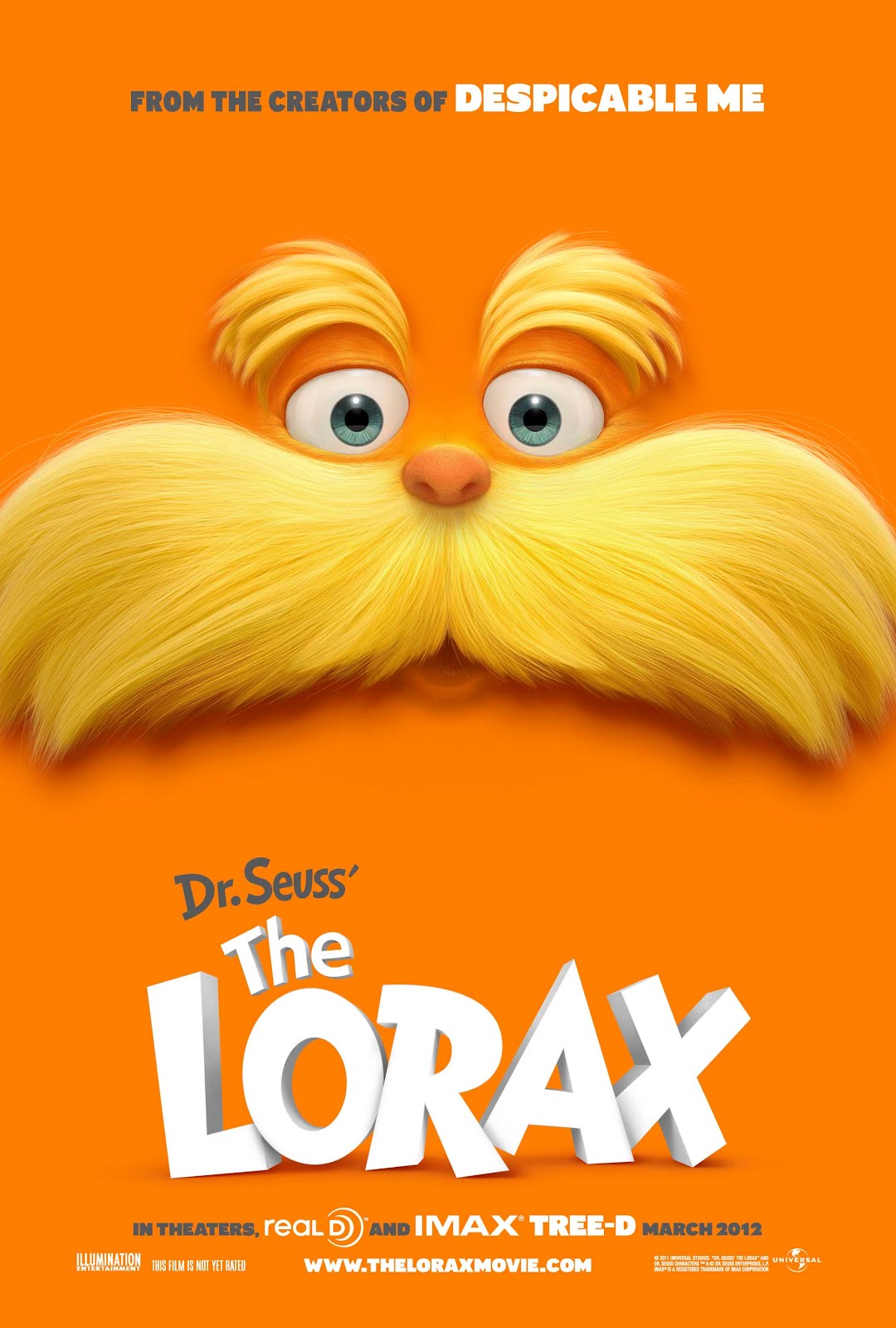 Hey there.  This weekend was the opening weekend of the film, The Lorax.  We haven't been to the theaters in awhile and I figured that it would be a great way to get out of heat (it was pretty hot in Southern California) and get into a nice air conditioned room and catch a movie.  Considering that 3D was only a dollar more per ticket, we went with the 3D version instead of the 2D version.  I'm still not sold on the whole 3D thing, but it does make movies a tad more interesting to watch.  After the popcorn was in the bucket, and the candy and nachos were passed out, we finally got to watching the film.  As with all of my "Thoughts on... posts, there are SPOILERS AHEAD.  If you plan on watching this film anytime soon, go check it out and then come back.  Here are my thoughts on...  The Lorax.

Colorful, colorful, colorful.  The film has GREAT contrast between bright, beautiful colors used for the town and the stark, dark colors used for the outside of town.  It was a great way to visually draw attention to what the inhabitants of Thneedville think is great and what has actually occurred.  It's one of the first things that really stand out while watching the film.  The green fields and colorful trees where perfect when the Once-ler arrived. After he and his family cut them down and destroyed the luscious scenery, the dark colors of brown, black, and grey were perfect to depict those moments of doom and gloom. 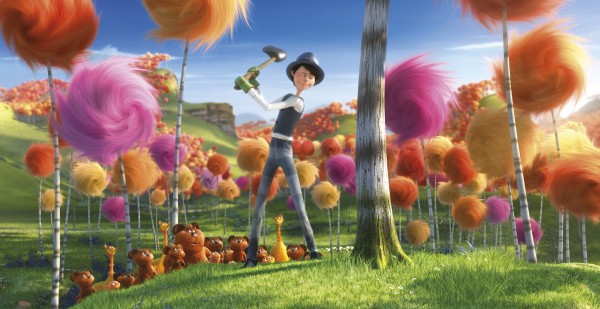 The film also did a masterful job of bringing to the light the disaster that is caused when all the natural plant life is destroyed.  For a family film, there was some grim consequences that adults are very well aware of, but the way The Lorax brings it to the table is easy for children to understand.  The back story of how it all came to be with the Once-ler was perfect.  An everyday man with a dream going out into the world to make it happen.  He is easily the protagonist in the early part of the film but as an adult, you wonder if he is really antagonist because of all the destruction that he caused.  Yes, he provided the boy with the seed.  Yes, he provided the single shot of life that needed to happen.  When but when I really stop and think about it... did he really need someone to prove themselves worthy of planting a seed?  Why couldn't he do it himself?  Obviously he had the tools since you can see him watering the trees at the end of the film.  I understand the whole "redeeming himself" logic behind it but wouldn't he have done a better job of redemption if he actually did it himself?

The voice acting was not bad and I was surprised to see that the film had some very recognizable names.  Taylor Swift, Zac Efron, Ed Helms, Betty White, and Danny Devito.  Not a shabby list, right?  A little something for the young ones to identify with a little something that the older audience can get behind.  And, I could be wrong here, but Danny Devito's voice was PERFECT as the voice of the Lorax.  It wasn't a comically, overdone voice, it was more of a lovable grandfather type and that's exactly what was needed for The Lorax.  He being the "speaker for the trees", it would have been a mistake to give The Lorax a more "zany and funny" type voice that you would expect to hear from a Dr. Seuss type character.  Ed Helms did such a good job, that I didn't even know it was him!  lol  I thought that maybe he would play a small role and it was his voice that we were hearing throughout much of the film.  Bravo, my good man.  Betty White shines as the "cool grandma".  The part is everything that Betty White is these days.  lol  And I couldn't say too much about Zac and Taylor.  I just thought that they're roles didn't have too much in conversation so those voices are thrown in here and there.  Sucks to say, but I think it was a good decision to NOT include them if they were not needed.

And then there was the entertainment value of the film.  As expected from a family film, there were some musical numbers thrown in and humorous moments sprinkled through the film.  Considering the serious undertone of destroying the landscape, the music was tastefully done.  With "Let it Grow" being the last number to really drive the point home.  O-Haire provided the villain in the film and even he and his actions drew a few chuckles out of me.  Especially early on in the film with the commercial for "air in a bottle."  It so reminded me of those Coors light train commercials.  My daughter was near tears by the end of the film and my 2 year old sat through the whole thing, enjoying the film.  You know how hard it is have a 2 year old sit for 30 mins?  Let alone an hour and a half!  lol  All in all, it is a great film to enjoy with a very powerful message.  I enjoyed it and by the looks of it, millions of others have enjoyed it as well.  Later!
Posted by Metallman at Monday, March 05, 2012