Thoughts on... Let Me In 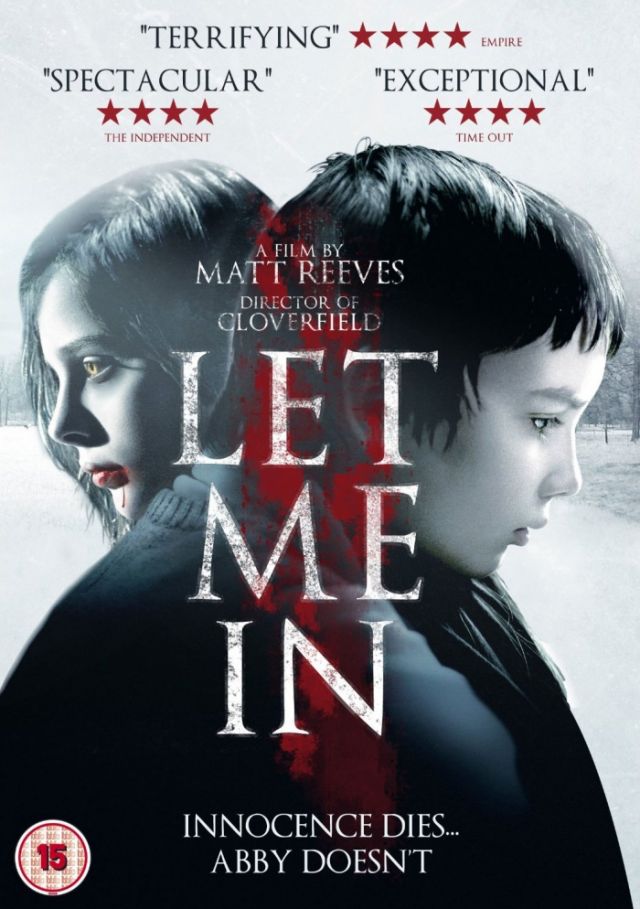 Hey there.  I caught this film a week or so ago when I couldn't find anything else to watch on TV.  Isn't it funny that is usually how you stumble across movies you've been wanting to see?  I've had this one in my sight for awhile now but never really got around to watching it.  I seem to be attracted to foreign films that were remade for the American audience.  This one is no different since there is a Japanese, Spanish, French films based on the original Swedish book. Anyways, before I continue, let me warn you.  THERE ARE SPOILERS BELOW!!!  If you haven't seen the film an plan on seeing it soon, go check it out and then come back and let me know what you think.  Here are my thoughts on...  Let Me In.

First off, I think the title of the film is great.  Though the movie never directly states that there are vampires in the movie, there is plenty of speculation and implication that the female lead is a vampire.  The title itself is insinuates that Abby may be a vampire.  Many people are aware of the tell all signs of a vampire: pale skin, drinks blood, sunlight is deadly, sharp fangs, and they can fly.  Right?  Another one is that a vampire MUST be allowed to enter a home or there will be dire consequences.  If you are not familiar with that little bit of vampire lore, the title can take on several different meanings.  And just in case you're not sure what happens if not invited, the directed added a scene in the film that will show you.
The film follows the relationship that blooms between Abby and Owen.  Owen's parents are divorcing and he finds himself alone, confused, and bullied in school.  One night, while outside, he meets Abby.  They're both around the same age and Owen yearns for a friend, but there is something off about the little girl.  Abby straight out tells Owen that they cannot be friends and Owen, attempting to show off some toughness, states that he doesn't care.  I bring up this scene in particular because I think it's an important one that allows us to peek into Abby's mind.  Why would you say that you do not want to be friends?  Why push away companionship?  If you're what Abby is, I'm sure you've seen people come and go.  Once Owen discovers her secret, Abby does not reveal her true age to Owen.  She simply says that she's "been 12 for a long time."  I believe that Abby's first act towards Owen was made out of years of frustration and pain.  How can you be friends with someone and then see them grow up while you stay the same?  How many times has Abby gone through that?  When the film was over, this scene was the one that I came back to.  This was the scene that said, this young (or old) one wasn't malicious.

Ultimately, I believe this to be a story of two adolescents trying to find a place for themselves.  Abby has been fed blood to keep her from killing, but when her "father" is severely injured during an attempted murder, Abby is left alone.  Owen's mother is virtually nonexistent and his father no longer lives with him.  He needs someone in his life that will accept him.  Because they live in the same apartment complex with a shared wall, they learn morse code and tap on the wall to communicate with each other.  Their pact is so strong, that Owen is compelled to Owen confronts Abby about herself.  He storms off in a feeble attempt to stop seeing her.  Abby keeps her distance, for a little while, until the two confront each other and when Owen refuses to allow her inside his apartment, Abby steps in anyways.  This is where we see that they both care for each other and they both know it.  It's touching, really, and that's why the film works.  Touching is the last thing that I expected from this film.  The relationship leaves a lasting impression on you.  Through all the chaos goes on, it boils down to the relationship that they formed. 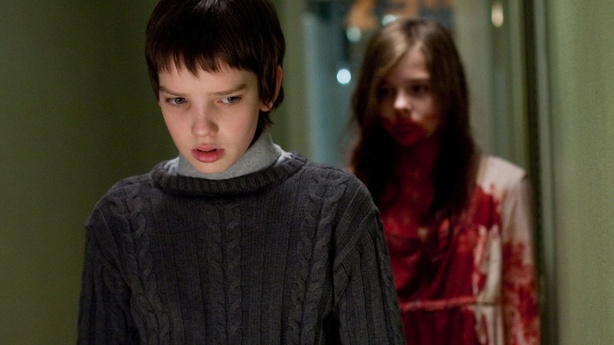 My last thought is in regards to the rating on this film.  I was surprised that it was rated R. I thought that it would be a gore fest with plenty of foul language and intense scenes with a rating like that.  Aside from a very brief nudity scene early in the film, I didn't think there really was much that would generate that R rating.  Then again, I'm not on that panel.  Maybe it was the violence, maybe it was that brief scene, or maybe it was the way a person was mauled.  I don't know, but when I see that rating, I figure that there would be more adult scenes involved where kids should be shooed away.  And you know what... I'm glad that it wasn't.  The film's pace flowed beautifully the way it was.  There was no need for any added violence or gore.  The amount shown was the right amount.  Hell, they even showed less than expected.  The last scene at the pool would have been perfect to showcase the destruction that Abby is capable of.  But instead, the director chose a more "behind the scenes" approach and let our imaginations run wild as to what Abby did to those boys.  We never see Abby in that scene, and we don't really know whether or not it was her.  It's ambiguous and intense and it leaves us to wonder.

I recommend watching this film.  There are some tense moments in the film but they come at unexpected places.  There are a few F bombs but other than that, the language is not too bad and again, there is ONE 2 second scene early in the film to shield young eyes from.  Other than that, sit back and enjoy.  It's perfect for those days when you just couldn't find anything else to watch.  Later!

Posted by Metallman at Wednesday, February 22, 2012

Email ThisBlogThis!Share to TwitterShare to FacebookShare to Pinterest
Labels: Horror, Let Me In, Movie, Thoughts On..., TV