SAY NO Releases 7 Tracks on Their Secret Page

This is a Sponsored post written by me on behalf of SAY NO for SocialSpark. All opinions are 100% mine. 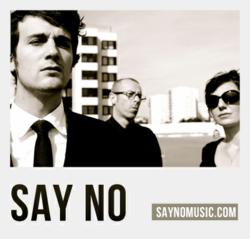 Hey there.  I'm all for music.  I'm a fan of many genres, the heavy metal/rock & roll variety is my favorite, so when a musical act decides to try something a little different, I'm all for it.  The recent trend of big name artists has been releasing a track, or even a whole album, to the public for free downloading.  I think it's great.  Why not?  A small thank you to the fans that have made you millions.  Will it really hurt to provide us with free tunes?  On the contrary, I think that those gestures of gratitude will actually increase fan loyalty.  I'm more than willing to support a band that is willing to give us a taste of their music for free.  How else are we to determine whether or not we like it?  This is why I'm in support of the band SAY NO.

They are offering a "secret" website that will feature 7 tracks off of their highly anticipated album coming out later this year.  As a thanks to the fans, you can check out this Link to this Secret Page to listen to the tracks on the album.  You will then have the chance to vote on your favorite song.  Voters will be allowed to download the song for free and if chosen, you could also win a $50 iTunes gift card or an iPad.  Not bad just for listening to some music, no?

Continue to support the arts.  Listen to new bands and encourage young ones to continue to blaze the way to rock.  Being heavily influenced by greats such as the Sex Pistols, SAY NO continues down the path of Rock and is more than willing giving back to fans and us as fans, should support them.  Later!

Email ThisBlogThis!Share to TwitterShare to FacebookShare to Pinterest
Labels: Music, Say No