Thoughts On... The Human Centipede 2 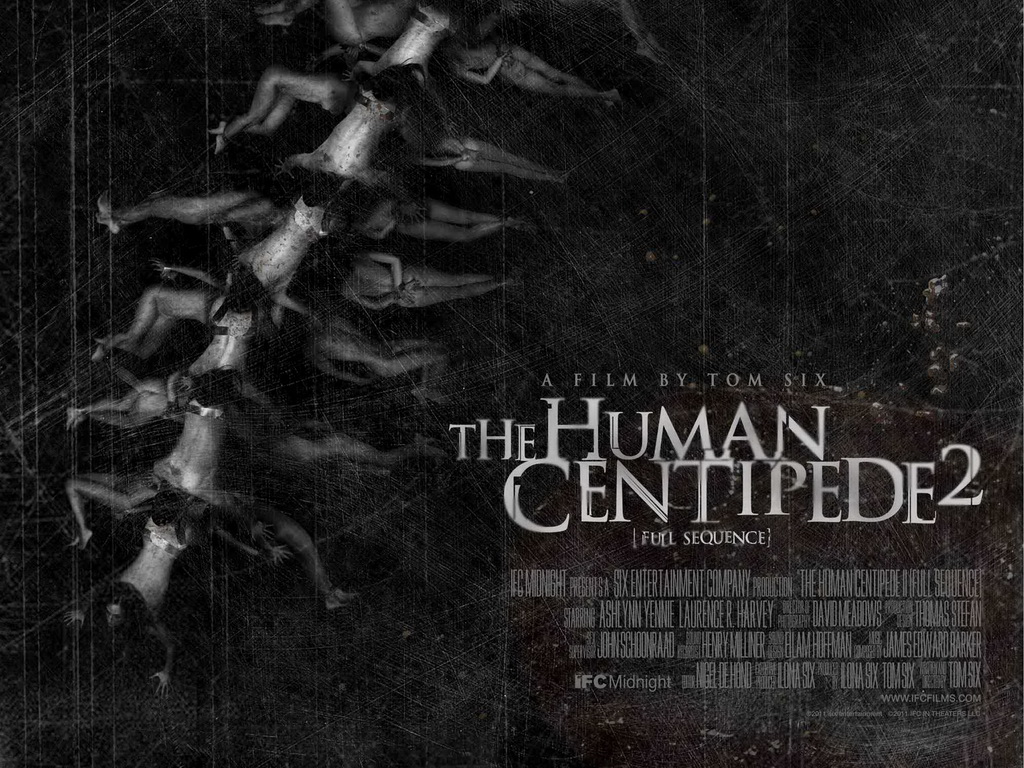 Hey there.  What an insane movie.  When I heard that the sequel to The Human Centipede was to be made, I knew that I had to watch it.  Weird, quirky, disgusting, intense horror flicks are what I like to watch and The Human Centipede did not disappoint in that respect.  The first film told the story of a doctor that came up with a way to create a "human centipede".  He created his specimen by attaching 3 people.  The film used it's tagline, 100% medically accurate, to intrigue viewers.  Is it really possible to attach people that way and have them survive?  The film ended in some what of a cliffhanger and I needed to watch part 2 to see what would happen next.  Especially since word on the web said that the second part would include a 12 human centipede!  So here are my thoughts on, The Human Centipede 2!  *SPOILERS AHEAD*

The movie starts with the ending scene of the first film in black and white.  I instantly associated it with a flashback and thought that the film will be a continuation of the first film.  We are being reminded as to how the movie ended and we are going to be shown what happens next.  WRONG!  The credits roll and the screen pulls back to show our main character, Martin, watching the movie on his laptop.  What the...  the film just referenced the first part!  This is not going to be a conventional sequel.
The next thing that struck me was the monochrome color.  The film starts off in black and white.  This wasn't a shock since the beginning of the film is what I thought to be a flashback.  Flashbacks in films tend to be a different color, tend to have something off about them, or tend to be a little fuzzy.  Because the film starts off in black and white and ends in black in white, it gives the film an eerie dreamlike aura (more on that later).  As the film progressed, the monochrome scheme worked really well for this film.  The warehouse seemed grimier, the shadows were darker, and every scene had a sense of something being just not right.  It set the atmosphere for a tense film and you have to give the film makers kudos for it.

The Human Centipede 2 is a film of few words.  Martin does not utter a single word in this film.  He quietly sobs, he shows anger, he shows excitement, but never once does he express himself with words.  Even through moments of chaos, his silence is deafening.  And soon after I noticed that words were not being spoken, it dawned on me that this film was going to rely heavily on imagery and sounds.  And it was definitely effective.  Take the main character for example.  Martin himself is a weird looking dude.  He's a heavy set guy with huge buggy eyes and there just seems to be something off with his appearance.  Seeing him onscreen just made you feel uneasy.  As for sounds, there are constant sounds off in the distance.  Ticking, banging, fizzing lights.  It's almost as if you're hearing things. The color and sounds is a character in this film in their own right.
Now....after watching the film, I got to thinking.  What is this film about?  It's obviously not a direct sequel.  Martin is a mentally unstable man.  He's obviously obsessed with The Human Centipede film since he's gone out of his way to capture people to create his own human centipede.  The fact that he even considered doing it is crazy.  He has no medical background and turns himself into a makeshift surgeon using kitchen knives, power tools, and another other household items as his surgical instruments.  He severs ligaments and tendons, he brutally carves into the bodies of his victims, and once he realizes that he's not going to be able to do it like the doc in the first film, he resorts to barbaric lengths and staples the mouths of his victims to the other back side of others.  While relishing in his achievement, he is sexually aroused by his human centipede. He even goes as far as to have his way with the back end of it.  This, my friends, is the climax of the film.  The centipede breaks apart, hell ensues, people are killed, one escapes, and in the very last scene...  We see Martin, sitting... in front of his laptop, at work, watching is all time obsession, The Human Centipede.

What the...  Was it all a dream?  I'm inclined to say yes.  Studies show that the majority of people dream in black and white and Martin has been victimized by society and by his parents.  Was this film a vision from Martin's brain?  Did we just see how he would become embolden and empower himself to do what he wants without any repercussions?  It makes a lot of sense.  Martin works as a parking lot employee.  There are many security cameras and Martin sure doesn't shy away from them.  After the first few victims, I would assume that someone would be looking for them, that someone would track them down to the lot where Martin worked, and that someone would bother looking at the security tape!  But it didn't happen.  If this theory is correct, wow.  Simply wow.  The ending is so ambiguous that you have no sense of whether or not was you saw actually happened.  Personally, I don't think they did.  Either way, The Human Centipede 2 is an interesting look into a man who takes his obsession way too far.  Later!

Posted by Metallman at Wednesday, November 30, 2011