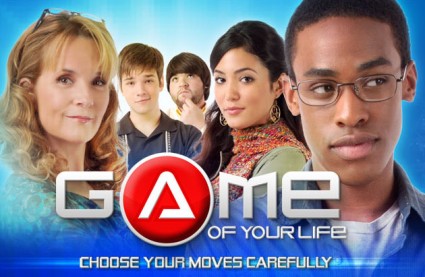 Hey there.  Our good friends at Walmart and P&G have another great film on the horizon!  Game of Your Life is set to air on Friday, December 2nd on NBC at 8pm ET/7pm CT.  If you guys are not familiar with these films, they are family films that you can sit and watch with the family that primarily focus on tough subject matters that kids should know about.  They are films of morals, loyalty, family,drugs, and the like, that can open the door for parents to talk with their kids about these tough subject matters.  These talks can no longer be awkward when the film has already nudged the conversation to start.  This week's film is no different.

Game of Your Life deals introduces us to Zach, a gamer at heart.  Loving video games, he earns an opportunity to land a spot in the prestigious Digital Institute of Game Design.  A gamer's dream!  The class is tough, though, and the infamous freshman project eliminates more than half the class within the first three months!  However, young Zach has formed a strong group of bright students in order to past the test.  The social interactive game that they come up with is setting up the group for success but then word gets to Zach that his father is in some financial turmoil, Zach torn between family and school, and decides to take a side job to help out his father.  With Zach not pulling his weight on the project, his classmates contemplate on removing Zach from the group.  School and family are at a crossroads and young Zach is at loss.  With the guidance of the professor, Zach makes choices that not only affect him, but those around him as well.  It is a gripping story of how one choice can cause a ripple effect and affect those around you.  Check out the trailer below.
It's a must watch, friends.  Especially if you have kids and want to have a conversation about the importance of choices.  Their actions now determine what happens later.  Their decisions later will affect their course, and those around them, to a different path.  Make sure to tune in to NBC this Friday and find out what happens to Zach!  To find out more about Family Movie Night, check out their Facebook page or the official Family Movie Night website.  Later!

“I wrote this review while participating in a campaign by Dad Central Consulting on behalf of P&G and received a promotional item to thank me for taking the time to participate.”
Posted by Metallman at Tuesday, November 29, 2011