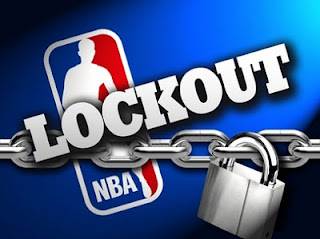 Hey there.  I love basketball and the fact that there's no NBA on my TV in November just seems wrong.  The 2011 NBA lockout just seemed to be a ridiculous at times.  The NBA was coming off one of the most exciting Finals in recent memory and the NBA seemed poised to build on that momentum.  Instead, the NBA allowed to league to lose steam, allowed the players to seek employment elsewhere, and allowed the fans to be irritated beyond belief that a collective bargaining agreement could not be made.  However, today, the NBA and it's players have tentatively agreed on a new deal to get basketball back on TV starting on Christmas Day!

I'm ecstatic that the NBA is back on.   The NBA has always been an integral part of my holidays and it just didn't seem right and I have not been able to catch any basketball.  With training camps set to start in early December, the NBA will begin it's 66 game season with a triple header game day on Christmas Day!  A regular season is 82 games so we're missing out on 16 games, but that's OK.  At this point, I will take any games as opposed to none.

The NBA season has looked dead on several occasions.  Especially when the 2 sides would meet for well over 10 hours and not make any progress.  NBA pundits everywhere called the players and owners selfish.  I'm no pundit, I'm a fan.  The NBA is an entertaining product.  The bottom line for us fans is not the details of a deal, but to get the season started on time to please me.  I strongly believed that if the NBA were to lose a season, they would lose massive amounts of fans.  Again, they should have built up the momentum of last year's final and they should have picked up steam.  Instead the NBA fizzled, the buzz is gone, people are tired of hearing of the lockout.  The NBA took the first step to redeem itself.  Even though the deal is not set in stone, at least it's a deal that both sides are smiling over.  Later!

Posted by Metallman at Saturday, November 26, 2011