The Walking Dead on AMC is Not Your Typical Zombie Show

Hey there.  Last year, a great show aired on AMC and guess what...  I missed it.  Of course I did, I mean, who wants to hear about another zombie show/movie?  I'll admit that even though I love the genre, it seemed so saturated at the time that I didn't pay it any mind.  And considering that AMC picked up the show for only a 6 season episode makes me believe that AMC must have thought the same thing.  Boy was I wrong!  The Walking Dead has been a great success for AMC and the second season is just underway and now I hear that they have picked it up for another full season!

Now, let's get something straight.  There so much you can do with zombies/infected beings.  You can hack and slash until you die, you can run until you die, you can search for a cure until you die, or you can simply succumb to them.  In other words... survive until you die.  I have just described every single zombie flick in existence.  So why would The Walking Dead be any different?  What spin can you possibly add to the zombie formula that you would want me to watch?  After watching the first episode, I knew the answer...  human emotions. 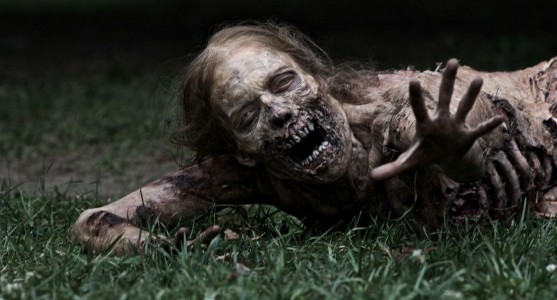 What makes this show so different from all others is that it focuses on the characters and their emotions and their morals.  The walkers, as they are called in the show, are a threat to the characters' existence but the walkers seem to be more of a tool to fuel emotions and the decisions that the characters make.  And even though I am all for a good hack and slash fest, I'm someone that loves a compelling story line.  This is where The Walking Dead shines.

Imagine waking up from a coma to find the world that you know no longer exists.  This is where the main character Rick finds himself.  He has no clue of the walkers and like any family man, he heads straight home to check on his family.  Find the house empty and completely clueless as to what has transpired, he is assaulted by a father and son, dealing with their own problems.  After a brief conversation with them, it is apparent to Rick that his mission now is look for his family.  His longing for his family is what will keep him going.  And as the show progresses and Rick finds himself in tough situations, just how far is Rick willing to go to help those that have helped save his life? 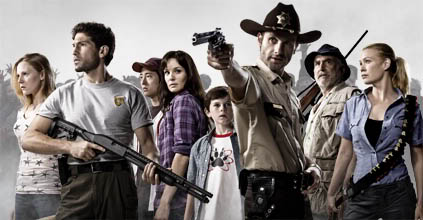 As characters are introduced, the first thing that I noticed is that each one is flawed.  Whether it be the racist white guy, the overly prideful deputy, or the abusive husband, the characters are human and those emotions carry this show.  The diverse cast makes for a great melting pot of characteristics that it's compelling to see how they interact and intertwine.  This is not a show of survivalist looking to outlast zombies.  This is a show of raw, human characters that are coping with death, finding faith, and dealing with acceptance that this is what their lives are.  It feeds us those emotions and nudges us to ask ourselves if we would have done the same.  Would your morals change if you were forced to make life altering decisions?

If you haven't had a chance to catch this show, you definitely must.  You can find the first season on Netflix and the second season is only 2 episodes in.  Any cable provider with an "on demand" option should have the first 2 episodes for you to watch and make sure to tune in to AMC on Sundays (check your local listings) to catch the new episodes.  I haven't had a show that would fill in the empty space that LOST once occupied.  After seeing what The Walking Dead has to offer, I think I've found that show.  Later!
Posted by Metallman at Tuesday, October 25, 2011