Rise of Nightmares for the Xbox 360 Kinect 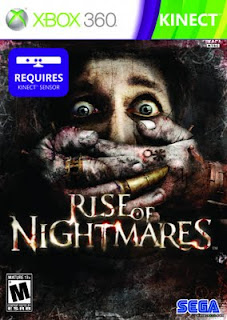 Hey there. Why am I excited about a game for the Kinect? Don't I already know that Kinect games fall into one of 2 categories. They are either dance games or they are "mini game" games. There hasn't been that Kinect game that has a story centered around it. Well, that ends today! Rise of Nightmares is here to shake up the Kinect lineup and hopes to add a new dimension to the kid friendly titles that currently stock store shelves.

Rise of Nightmares will allow the player to be a chainsaw wielding, axe chucking, pipe swinging character in a house full of, you guessed it, ZOMBIES! And there's a story behind the madness! No longer will you be using your Kinect to obtain a high score, you'll actually be playing to get through, ahem... survive through an adventure. Similar in style with the classic, House of the Dead, Rise of Nightmares will pit you against a horde of zombies. Using your body, you'll be fully immersed in the action as you swing at zombies and actually push them off you. I'm actually pretty excited about this game!

Now, don't get me wrong.  I know this is not the revolutionary game of the century or anything like that.  It is simply the FIRST to step out of line and try something new.  As many of you already know, developers are already working on integrating Kinect capabilities on FPS and other genres of video games.  I don't expect the first crack at something new to be great, but I'm sure glad that the first step has been taken!  It will only lead to even more awesomeness in the future!

Here is a trailer of the game, which so happens to be released today! I might be on the minority here but I like the "comical" music with such gruesome imagery.  Sega is acknowledging that they are stepping into family friendly turf and with this trailer, are simply mocking themselves.  I think it's brilliant.  Anyways, I already have my reserved copy at Gamestop waiting for me so I'll be stopping by to pick that up a little later today. After a few hours of getting my nightmare on, I'll have an in depth review posted at Dragonblogger.com! Make sure you guys have your eyes peeled out for that! So... are you ready to step into this nightmare with me? Later!
Posted by Metallman at Tuesday, September 06, 2011