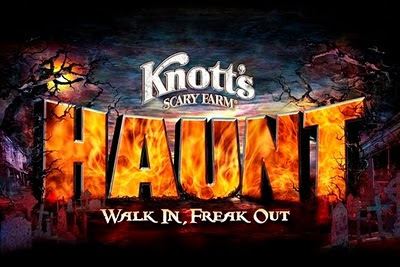 Hey there. Knott's Berry Farm is but a mere 15 minute drive from my house so it should come as a surprise that I just don't go there very often. Maybe it's the stigma associated with the place. You know, that so thrilling and more of a kid's place. Considering that Southern California is also home to Six Flags Magic Mountain, Disneyland, Universal Studios, and many other theme parks, Knott's is the one that I would least likely to go. But this year... it's going to be different. This Friday, the wife and I are heading to Knott's Scary Farm.

Many of the theme parks here revamp their images for the Halloween season. We usually go to Disneyland during that time, since they redo the Haunted Mansion with a Nightmare Before Christmas theme. It's pretty cool actually and since the wife and I both fans, we try to catch that whenever we can. This year, we're going to switch it up and check out Knott's Scary Farm. They redo the whole theme park with eerie, dark, and walking dead type theme and from what I've been told, it's pretty good. Oh yeah, I forgot to mention that this will be my first time there during Knott's Scary Farm. lol Anyways, it should be pretty good. A group of friends and family are going together so that should add to the fun. I must say, it's probably the first time that I'm actually looking forward to going to Knott's Berry Farm.

So what kind of local festivities are there in your city? Any cool attractions that come out only during this time of year? I'm a huge fan of horror and I would love to know if they do any "scary" type things in your home town like they do in Southern California. Let me know, friends!!!! Later!
Posted by Metallman at Tuesday, September 20, 2011