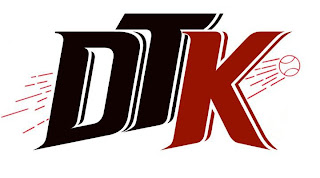 Hey there.  So my very first softball game took place Wednesday night and I must say that it was an exciting experience.  It's a coed softball team and it mainly consists of my brother's friends (which are now becoming my friends) so with the exception of myself and a few others, the team chemistry is great.  We've lost our 2 scrimmage games but we showed awesome cohesion and when we heard that our fist game would be against the team that was beating 18-0 at one point, we were ready for some revenge.

I've said it many times before that I am not a huge baseball fan.  I've always found the sport to be slow and unbearable to watch.  That is not case when I'm with the team.  I'm into the action, I'm cheering on teammates, and I'm yelling at the umpire (I still call him ref from time to time).  Being on the team is slowly converting me into a fan.

So how was game 1?  Pretty awesome!  We won!  I must admit that I wasn't expecting a victory on our first game.  As mentioned above, we were getting killed on our first scrimmage by 18 at one point and ended up losing the game by 4 runs.  In our second scrimmage game, we lost by one, so it was looking like we struggled to close out games.  In game 1, we jumped out on top and stayed on top.  Awesome catches by the outfield and the infield kept our defense off the field and gutsy plays on offense kept the rolling.  There was an infield home run and a close call slide at home for a run that excited our fans and team.  Final score?  13-8.  DTK on top!  YES!

Make sure to check out our DTK facebook page to keep up with the games and all things DTK.  Your truly is running the page so feel free to drop me line if you want to support the team in any way.  Check out some of the photos from game 1.  Thanks again to all that showed up to support us at the game!  We all greatly appreciate it!  Later!