Nintendo Drops the Ball with Their New Console: Wii U 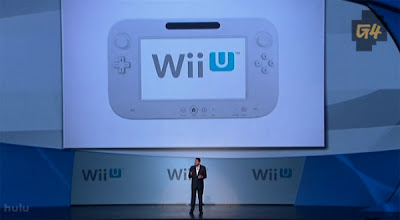 Hey there. I just wanted to get my initial reaction down before going in depth.  Nintendo really dropped the ball here.  Their new console, the Wii U, is meant for the more hard core gamers while retaining their youthful fans.  Most third party devolpers will provide games that are already available on PS3 and Xbox 360 for the Wii U but I cannot see how it will appeal to hardcore gamers.  Nintendo has the reputation of "child's play" and it will be difficult to shed that and if this was their asnwer for the hard core gamers, it is an epic fail.

The controller is atrocious...  It's massive.  The cool aspect of it, though, is that you can play Wii-U on the controller and do not need a TV.  Yet... Nintendo says that it's a home gaming system and not entirely a portable device.  I don't know about that.  I'm a little disappointed with their announcement since I was looking for them to push the envelope of the gaming experience and not so much on the portability.  Hit or miss?  What do you think?

This is my initial reaction to the announcement.  Tune to my in depth post at Dragonblogger.com  Thanks.
Posted by Metallman at Tuesday, June 07, 2011