A Happy Birthday and the Lakers Downfall

Hey there.  The Lakers are out of the playoffs...  I think I can now talk about it without getting too upset.  This was the team that was favored to sweep the Mavs, if not win in 5 games.  What the hell happened?!?!?!  Now there's talks about them being too old, Kobe not being Kobe, Gasol having personal issues, Odom is too inconsistent, blah blah blah...  Listen, this is the same team that has gone to the finals for 3 straight years.  This team is still made up of pretty much the same guys.  So what the hell happened???  Don't know.  But just by looking at the team during the games, they just looked uninspired.  Kind of like they were saying, no worries, we'll win the next one, and pretty much just sleepwalked through the games and that kind of attitude bit them in the ass.  The great thing about the Lakers is that we measure the season's success by championships.  If we win the title, it was a successful season.  If we don't win the title, then the season was a bust.  It's really as simple as that and all Laker fans are spoiled by that mentality.  We expect to win and when we don't, all hell breaks loose.  I'm hoping that they'll be able to get their act together and make another run next season, but man... did we just stink it up against the Mavs...

Now, on to brighter days.  My birthday was yesterday!  The big 2-9!  lmao  I don't make a big deal out of my birthday, I never have, but the wife loves to make it a little festive.  This year, she did this: 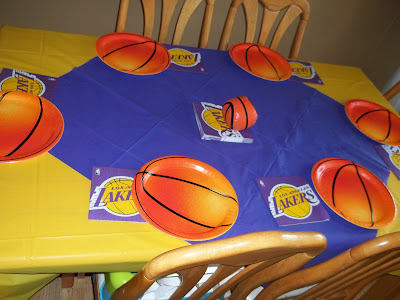 The wife is great at creating an atmosphere.  I know, I know...  Lakers were eliminated on Sunday, but we all didn't think that was gonna happen.  lol  So she carried on with her Lakers theme and prepared my meal of choice, T bone steak, mashed potatos and veggies!  Oh yeah!
Then we all sat together, had our dinner, and goofed around a bit.  Cause that's what we do.  The wife and I sat on the couch, watching the kids play with, wait for it...  balloons...  lmao  That's right, balloons.  I understand that the young one would want to bat around a balloon for kicks but the older kids were having a blast themselves.  lol
Then it was time for the cake.  As the wife gathered everyone around the cake and snapped a few photos, she asked to take one of me and the cake.  I think it's some kind of tradition to do that.  lol  So I sat in the chair waiting for the pic and this happened...
Whoa...  what is that?!  lmao!  Hand me a knife and some evil cloak because there is definitely murder in those eyes!  hahahahaaha!  The wife wasn't too happy with that one so we took another.
After I made my wish and blew out the candles it came time for the family portrait (which my wife conveniently decided she needed to take manually so that everyone comes out 'nice'  lol)
Awesome.  Awesome.  Awesome!  From the decorations, to the meal, to the cake, to the laughs.  A great b day spent with my family.  So why not go out to a "fancy" restaurant for your b day?  Eh.  I'd rather spend the time at home, messing around with the wife and kids than to have to "behave" at a restaurant.  The wife will tell ya, she jokes (well I think she's joking...) that I can be just as bad as the kids.  It just comes to show you that I like to have fun.  Regardless of what the candles on the cake say.  lol  Later!
Posted by Metallman at Tuesday, May 10, 2011