Hey there. I wanted to post this picture because I think it's awesome. lol  I haven't really had the chance to work on some Xboxes that need some repair.  They all have the 3 Red Rings and considering that I've had some moderate success in repairing them, I told my cuz I'd give it a go.  While I was cleaning the CPU and GPU chips on one of the machines, I got out of the chair to get a drink.  That's when I see my youngest boy on the chair, ready and eager to get to it.  lol  That's when I snapped the pic above.  My wife told me last night that our son grabbed his tools (toys) and placed them on top of the computer as if he was gearing up ready to work on it, just like his pops.  lol  That young one sure is something else. 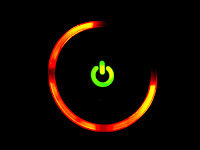 As for the Xboxes, I managed to get 1 of the 3 working.  I played some games on it and watched a DVD to make sure that it wouldn't over heat and it worked just fine.  I pieced it back together and it's ready to go back to the owner.  When I was about to work on Xbox #2, I decided to check the error code before digging in.  I find that it has error 0003, from what I've been told, may not be repairable due to a bad GPU or bad solder connections around the GPU.  I don't have the tools or the know how to even comprehend the problem, but I decided to remove the X-clamps and readjust the heat sinks.  Still no dice.  It has the same error code and considering that I'm not 100% what's wrong with it, I won't mess with it any more without the consent of the owner.  Xbox #3 will have to wait til tonight.  I haven't checked the code on it or anything but I'm confident that I'll be able to get it working.

I also picked up the Kinect for the Xbox not too long ago and I must say that it's pretty awesome.  We picked it up with Kinect Adventures and even though the games are simple enough, doing the "Adventure" really makes you move and gets you sweating.  Speaking of moves, we also picked up Zumba Fitness and even though I'm a terrible dancer, it's fun to try and do the dance moves.  lmao  I guess I'll need to do the tutorials on that one because trust me, I have no rhythm.  I'm surprised that the wife has not leaked the footage of me trying on youtube.  lol  Using the Kinect is definitely a work out on it's own and if you guys haven't had a chance to try it, you definitely should.  Until then, later!
Posted by Metallman at Friday, April 01, 2011