The Green Latern Arrives in the Metallman Home

Hey there friends.  How awesome is it that I was chosen to participate in this great promotion!  I arrived one day from work only to find these 2 great toys waiting for me: 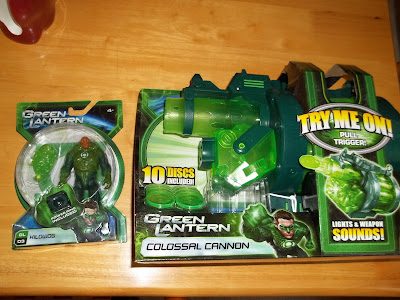 How awesome is that?! That is the Green Lantern Colossal Cannon and Kilowog!  The boys were definitely thrilled with receiving new toys.  They started playing with them immediately and that's when I knew that this is definitely a toy that they would bond over. 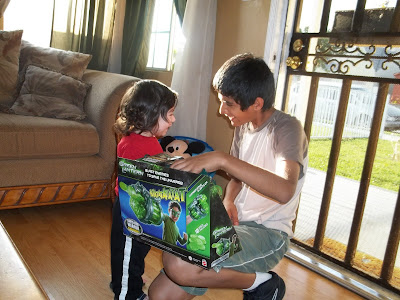 The Colossal Cannon definitely got more attention that the Kilowog action figure.  Even the though the action figure came with it's own Green Lantern Power Ring, it couldn't convince the kids to drop the cannon to play with it.  lol  The only problem that I had with Kilowog is that when you attach his green, glowing attachment to his arm, and raise it, there was no way for his to stand on his own.  That was a huge downer since it made him seem weak in the heat of "battle".  lol  My young one would use him to fight with his other action figures and by him standing without his power made him an easy target for defeat, or so he said.
My boy:  "Dad, it sucks that Kilowog can't stand with his green power thing.  If he's the Green Lantern and can make anything with that ring, maybe he should have made a cane to keep him up."
Kids...  lol  Once we figured out that he can stand with the attachment if we keep his arms down, the kids started to line him and others up for target practice.  The Colossal Cannon is a great toy.  At first glance, I thought that it would be a projectile shooting gun with the potential to hurt people.  Thankfully, the discs that the cannon shoots seem to glide though the air as opposed to being blasted out.  That is a huge plus!  The gliding motion minimizes risk of injury and the cannon has enough power to send the discs a good 15 feet or so.  The discs are made of plastic but are not heavy at all.  As my oldest son practicing his shot, my youngest son would run around picking up the discs.  I even caught my youngest daughter taking aim at Kilowog! 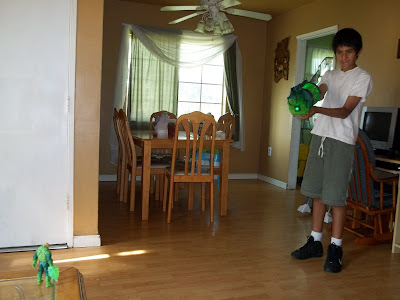 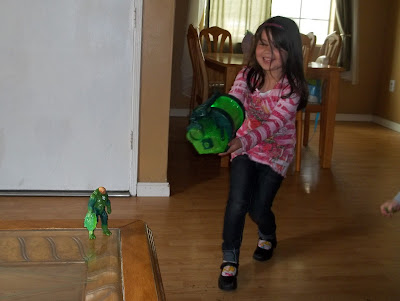 Kilowog the action figure is just that, an action figure and would be a great addition to a child's army of heroes.  The Green Lantern Colossal Cannon is an awesome toy that will bring much fun and excitement to kids.  I greatly recommend you guys check them out!  To find out more about these and other great Mattel toys, head on over to Mattel.com For more information.  Thank you, Dad Central Consulting, for the opportunity!

I wrote this review while participating in a blog tour by Dad Central Consulting on behalf of Mattel and received Green Lantern toys to facilitate my review and a promotional item to thank me for taking the time to participate.
Posted by Metallman at Thursday, April 21, 2011