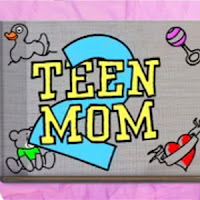 Hey there.  I was watching Teen Mom last night with the wife and I noticed the disclaimer right before the show stating something along the lines of teen pregnancy being 100% preventable.  There is this one couple on the show that smoke pot.  Now, I'm thinking to myself, they're underage, smoking pot is illegal (it wasn't for medicinal purposes, that's for sure) and they're filming and talking about it and broadcasting it on TV.  Am I missing something here?  The girl has a child and she's smoking pot to "get away".  Now, I understand that it's nowhere near the level of teen cocaine addiction, but don't you think that someone at MTV should be telling this girl that she may need help?  Her mother has custody of the girl's child, the girl has nowhere to stay, and it turns out that both her and her boyfriend smoke pot on a regular basis.  It's safe to say that the girl's family life is in shambles.

At the end of the season, Dr. Drew has a reunion type show with all the mothers and follows up on how their lives have changed since the show.  Dr. Drew is awesome.  He has his own show on MTV, Celebrity rehab with Dr. Drew.  Some of the testimonials that come out of that show are amazing.  These are spoiled celebrities who can be stubborn and if they make it through the show, express nothing but sincere gratitude to Dr. Drew.  But he doesn't just deal with adult treatments, he also specializes in teen addictions and helps with all sort of treatments such as teen cocaine treatment.  Anyways, I like how he gives them guidance on how to move forward depending on their situation.  What I don't like about the show is that there even is a show about it.

I understand that teen pregnancies happen.  Hell, I was a father in my teens.  But MTV and other networks shouldn't be glamorizing it.  I think I read somewhere that one of the mom's on this show said she was a role model.  No she's not.  It's difficult as it is to be a parent, let alone do it while still in high school, without a job, and without family support.  It's tough and I think it sucks that shows like this potentially add to the notion that if you do get pregnant at an early age, they can be on TV.  In my opinion, if you're about to have a baby and you don't have the slightest clue on what you're going to do, the last thing that should be crossing your mind is to be on TV.

I understand that some TV is meant for entertainment purposes.  I get the extreme stuff, the fashion stuff, the crazy stuff, but I don't get the teen pregnancy one.  Tell me again why people would care to watch a child raise another?  If it's a documentary or a movie, I can see the appeal, but this is a TV show that is meant to entertain the young demographic that MTV caters too.  And let's be real, here.  This is NOT a reality show.  The pregnancy is real, but when you're getting paid a 6 figure salary, see previous teen mom train wreck Amber, there is no way that MTV is not staging some of the stuff on the show.  If you want to watch for entertainment purposes, by all means go for it, but don't believe that the "stories" and "drama" behind it are real.  Later!
Posted by Metallman at Wednesday, March 02, 2011