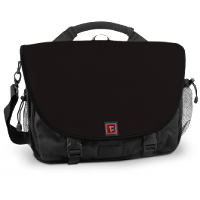 Hey there.  You know, I was thinking about nature and what not and have decided that I want to start hiking.  Maybe even write about what I see and do while out and about with the family.  The problem?  If you don't have tough, rugged equipment, you will find your stuff torn by the elements.  Rocks, branches, brush... they will all nip and tear at your bags and what not.  I was telling myself that if I were to play a Henry David Thoreau type person, I would need my laptop to write about nature.  Hey, it's the 21th century.  lol  While Mr. Thoreau may have used ink and quills, I'm using a laptop.  Just at a glance, I would need a laptop messenger bag that is built for the elements. Something that will stand against nature or at least give my laptop a fighting chance of surviving.  How else am I going to write the next Walden without my laptop?

I've been on a mission recently to read more literary classics.  So far, I've read Catcher in the Rye and Siddhartha.  While more books are coming my way, I started to think how these classics would be written today.  Going back to Thoreau's Walden, I don't think we would be able to create such a masterpiece of solitude today.  There is technology everywhere.  Cell phones, laptops, smartphones, tablets...  Pen and paper have been replaced with keyboards and software.  Would Sheldon be so full of angst if he could take it out on a game of Angry Birds?  Would Siddhartha use GPS tracking to navigate through the jungles to find himself and total bliss?

It's awesome that tales from the past rely heavily on the art of story telling.  So while I'm trekking across rugged terrain, I can stop, look at my kindle and read up on some classics.  What books do you recommend?  There are still a few that I would like to own, like Billy Budd.  It's a short story but a good one nonetheless.  Later!
Posted by Metallman at Tuesday, March 15, 2011