Hey there.  I try not post news type stuffs on this blog, since I figured that the same story is posted just about anywhere else on the web, but this one intrigues me.  As you may or may not know, things in Egypt have been bad.  Very bad.  There is so much turmoil between the people of Egypt and their leaders that the people have turned to violence due to the authoritarian ways of their president.  Today, the president finally steps down and the military has taken power.  Can you imagine something like that happening in the States?  Where the people of the US say, "Screw you prez!" and marches, and protests are rampant throughout the States because the people are standing up to what they believe in.  I think that the police force would start taking advantage and use their authority to have their way.  I can imagine that police harassment would be up, similar to the stuff that went down in Orlando, Fl .  Imagine the military coming in and taking control?  That's just an insane thought to me. 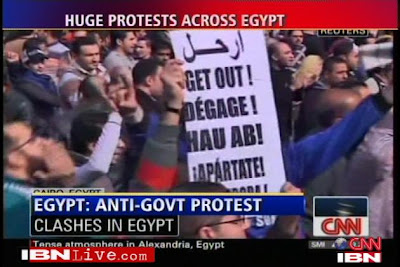 I'm glad that the people of Egypt are rejoicing over their president stepping down.  It's good to see that the voice of the people still has a purpose.  What's awful about the whole thing is that the voice used was not only that of reason, but that of violence.  Congrats and best of luck, Egypt.  Your people have spoken, changes are being made and democracy is on it's way.  I hope that all turns out well for you.  Later!
Posted by Metallman at Friday, February 11, 2011