Hey there.  Do you believe in ghosts?  I believe that there definitely is something after life... not so sure of ghosts, though.  Maybe better referred to as energies?  You know, people have always been infatuated with things that go bump in the night and other "scary" occurrences that go on during a normal day.  If that wasn't the case, we wouldn't see films like Paranormal Activity being made.  I, myself, have experienced many things at home that I simply cannot explain.  I'm beginning to wonder if maybe those somethings are beginning to happen at work.

This morning, I walk into my office and I turn on my computer.  Nothing odd about that.  I go and grab my coffee and sit down, ready to tackle today's work load.  That's when it hit me...  why do I smell cigarettes?  I don't smoke, my window is closed, and no one has been in my office.  Why the smell of smoke and cigarettes?  Hmmm...  I walk around and sniff to see if maybe I can get to the bottom of it.  Nothing.  A coworker then walks by so I ask if she can step into my office.  I ask if she can smell it.  (insert inappropriate fart joke here)  lol  She says smell what and I tell her cigarettes.  She doesn't so she calls me crazy and walks away.  Hmmm... maybe I am crazy, but then again... I think I know what it is.

I wouldn't doubt it if it's my dad.

Yup, my pops probably followed me to work today.  Why followed?  Well, because I wouldn't doubt it if all the weird stuff that goes on at home is him as well.  Footsteps in the hallways, cabinets opening on their own, my dog being let inside the house when the doors were locked, corona bottles opening by themselves, cans and jars rocking back and forth... the list goes on and on.  Today... I can add, noticed my dad at work.

My dad had 2 distinct scents to him.  He loved to splash on Brut cologne (yup, old school) and he smoked... a lot.  You know how some people say that you can tell the presence of an "energy" by smelling a scent that they were most associated with.  I would say the two I mentioned definitely would fit my father.  Also, I recently mentioned to my kids that we would go see grandpa this weekend so maybe the smell was his way of reminding me that I better go see him.

It's been almost 20 years now since my pops passed and it intrigues me that most of the "activity" centers around the kids.  Their toys go off on their own, their swing sets swing on their own, bouncers are bouncing without batteries.  Recently, the baby has taken a liking to my dad's drawing on the wall. 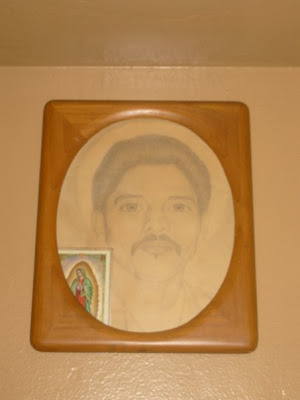 He'll start to point, laugh, and stare at it from time to time.  My oldest, when he was younger, would say that "a ghost" would tell him where things were and to stay away from fire.  And then not too long ago, my youngest daughter started mentioning that she's been talking to "little grandpa" and has shown a stronger interest in seeing him more at the cemetery.  So I guess today turned out to be, "tag along with my son to work to remind him to go see me at the cemetery" day.  lol  No worries, dad.  I'll be there.  And we wont forget the beer.  Later!
Posted by Metallman at Thursday, January 27, 2011