The Story of Angels on Christmas Trees 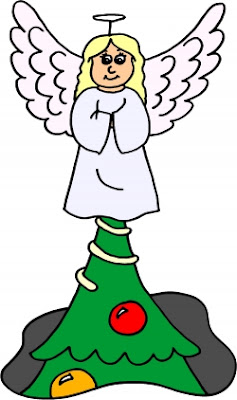 Ever wonder why it's an angel that sits atop Christmas trees? Well let me tell you the story.


One day, 4 of Santa's elves were sick and the trainee elves didn't produce as many toys as the regular ones and Santa began to feel the Christmas day pressure. That morning, Mrs. Claus tells Santa that her mother will be coming to visit, which stressed Santa. Then, when he went out to harness the reindeer, he found that 3 of them were about to give birth and 2 had jumped the fence and are nowhere to be found. Then, when he began to load the sleigh, one of the floorboards cracked and the toy bag fell, scattering toys everywhere.

Frustrated, Santa decided he needed a little drink so he went into the house for a cup of apple cider and a shot of rum. When he opened the cupboard, he found that the elves had drunk all the cider and his secret stash of rum. Upset, that the jug of cider was empty, he smashed it on the ground. He then went to get the broom to sweep up the glass when he noticed that the mice had eaten the straw off the end of the broom.

Just then, the doorbell rang. Irritated, Santa stomped his way towards the door to answer it. He yanked the door open and there stood a little angel with a huge and beautiful Christmas tree. Upon seeing Santa, the angel merrily said, "Merry Christmas Santa! Isn't it the most beautiful day today? I brought this beautiful tree for you. Where would you like me to stick it?"

And so began the tradition of the little angel on top of the Christmas tree.