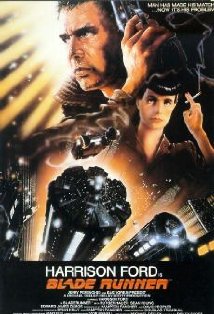 Thanks to Roman May

Blade Runner is a futuristic film based off the cult class sci-fi novel. This movie is one of the most well recognized cult-classics and is a favorite for many different movie watchers. Blade Runner is full of acrobatic action, guns, drama, and a multitude of emotional themes that make you appreciate the skill behind Harrison Fords acting.

The sci-fi aspect is what makes this film so interesting. Human clones roam in space freely, but their lifespans are set to end at a certain point. Deckard, the main character, is the one that is involved in ending the "life" of these clones. The main action comes into play when these "replicants" escape and come to the Earth with the wrong intentions.

"Deckard: [narrating] The report read "Routine retirement of a replicant." That didn't make me feel any better about shooting a woman in the back. " This quote is one of my favorites, and so powerful in meaning. Deckard is in a conflicting situation throughout the movie, but despite these non-human creatures needing to be "killed" he doesn't feel good about it.

Blade Runner is an excellent movie to watch on satellite television from www.bestchoicetv.com/, as most channels play it frequently. I am always happy to catch a showing of this film anytime, or anywhere.
Posted by Metallman at Friday, December 03, 2010