A Double Shower Head and a Stool

Hey there. It's been so hot here in Southern California that I find taking two showers a day. On the car ride home for lunch, I sweat up a storm and that's with the AC on!!! Today, I was tempted to jump in the shower and then head back... but you know what? The process starts over when I drive back to work, it's that hot. The sweat starts to drip off of me. Yuck! 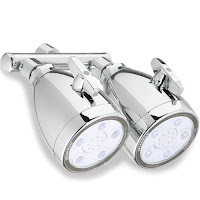 Today, during lunch, my wife suggested that we take a shower together. Now, I believe that taking a shower with your significant other is a great way to spend some quality time together. We've done it many times before but we end up finding the need for a double shower head. It's better when one of us doesn't have to be out in the cold while the other basks in the warm water.  Having a double shower head would definitely be better than one in this case.  There would no more complaining of being cold while the other bathes.  Now... if only we can tackle the "it's too hot, it's too cold" issue.  Then we'd be all set.

And while we're in the topic of showers, have you ever jumped in the shower, dead tired, and wanted to just stand there?  It's happened to me many times and I just realized that I don't need to stand.  If I had an awesome shower stool I would be able to sit in the shower and take it easy.  Now, I'm just being lazy.  I could stand and take it easy but if I had a seat made for a shower, imagine how much more sweat it would be!  lol  All kidding aside, I'm sure that these were made for the elderly.  They would be the ones to truly benefit from a shower stool.  I would just use it to be a little more lazy than usual.

Now I'm thinking of the bathroom...  The wife wants to change our floral bath towels for some Hello Kitty stuff.  I am not a fan of Hello Kitty.  She claims that she's going to change the theme of our bathroom one of these days, now that's she's at home while I'm at work.  A few weeks ago, I thought she did it too, when she sent me a pic of Hello Kitty bathroom stuffs.  I thought she was showing me things that she bought.  Luckily for me... it was just stuff she saw.  Whew...  Avoided catastrophe there.  Now... to wipe this sweat off of me...  Until it gets cooler.  Later!
Posted by Metallman at Friday, October 01, 2010