Problems with an iPod Touch

Hey there.  I'm usually the guy people turn to when their electronics are busted.  Busted XBOX 360? sure, I'll look at it.  Whacky computer?  I'll clean it out for you.  Electronic gizmos acting odd?  I'll figure it out.  It's been like this for as long as I can remember and you know what?  I don't mind.  I can be such a tech geek that I enjoy working on electronics for hours on end.  My latest project has been an iPod Touch that seems to have crapped out on it's owner. 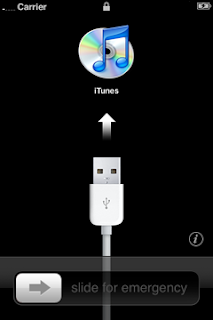 I was first shown the iPod when it was stuck in recovery mode after it was synced with some questionable software.  After explaining the dos and don'ts of the iPod use... I went to work on it.  None of the traditional methods of resetting the device worked, iTunes refused to recognize it and the drivers on the machine were corrupted.  I spent a few nights trying different methods and different versions of iTunes in hopes of getting it to work and only after I downloaded the driver, restarted the apple mobile device support and many re-installs of iTunes, did I finally get the iPod to register under DFU mode.  I directed it to install the driver and iTunes finally recognized it and I was finally able to restore it.  YES!  Or so I thought...

I turned on the iPod and everything seemed well.  You can sync it to iTunes and can generally use the iPod now.  Yesterday, I find out that the guy cannot sync his iPod to their iTunes and when plugged in, the computer "sees" the iPod as a camera.  What a pain...  So I checked that out yesterday.  I reinstalled iTunes and tried to direct the iPod to the correct driver but I had no success with it so I decided to take it home and check that out.  When I got there, I went to work on it right away and after a few minutes, it synced up with iTunes without a problem.  Hmmm....  I went ahead and reset the iPod to factory settings any and took out a flash drive and copied some of my iTunes files and iPod files on it and plan on replacing the user's files with mine, since I now believe that the problem may lie in their iTunes install or the user might have corrupted windows files...  If that's the case, I'll try to repair the windows installation while trying to preserve their files but I'm hoping that it wont come to that.

I plan on visiting later today to check that out.  Wish me luck friends.  Later!
Posted by Metallman at Monday, July 19, 2010