No TV Day at Home

Hey there. Yesterday was no TV day at home. And by no TV, I mean no TV, no PSP, no DS, no computer, no nothing with images on it. Why? Because 2 nights ago, the kids were playing Wii and didn't bother to go to sleep until 11PM. That's pretty late when their bed time is closer to 9:30 (now that they're on vacation). It was my fault for not keeping tabs of the time... I was online working. By the time I noticed it was pretty late, I told them to turn it off and go to bed and declared the next day, No TV. 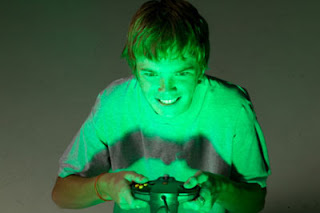 I thought the kids would have died... lol They live off of TV and games. The girls can't get enough of the Nickelodeon and Music channels and the boy is either playing Wii, XBOX 360, PS2, or has a handheld game glued to his hands. They needed this time to just go out and play with the dogs or do other activities that do no involve a gaming system. To my surprise, they did fairly well. A lot of reading and a lot of interaction with each other was pleasantly welcomed. I'm wondering if my maybe no TV day should come by more often... Later!
Posted by Metallman at Thursday, July 22, 2010