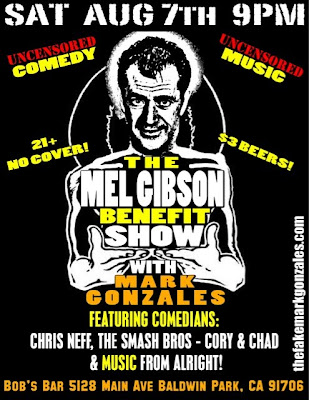 Hey there.  There has been a lot of talk of Mel Gibson and his idiotic rants to his girlfriend/wife/baby momma.  And even though he's being torn apart from the media, one man is out to help out Sergeant Martin Riggs by hosting a benefit show!  Check out the flyer above for The Mel Gibson Benefit Show with my friend and comedian, Mark Gonzales.

I've missed a few of his shows, so I declare myself to be an awful fan, but I plan on changing that!  I plan on attending this event and hope that you all you friends in the Los Angeles area can make it as well.

Check out his twitter page for a small taste of the humor of Mark Gonzales.  Hope to see you guys there!  Later!

PS:  We all know Mel Gibson is a huge douche for doing the things he's done and saying the things he's said.  This is a comedy show, people.  Take nothing seriously, laugh the night away, and have yourself a great time.  Later!
Posted by Metallman at Friday, July 16, 2010