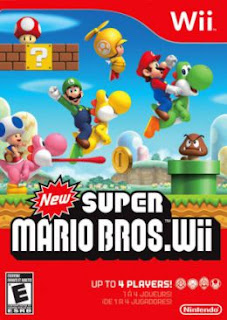 Hey there. Hope you all had a great and safe 4th of July weekend. The 4th of July is extra special to me, not only because of the 3 day weekend, but because it's also my daughter's birthday. She's been hinting for month's that she wants her own Nintendo DS. In terms of portable gaming systems... the kids have 2 PSPs and a DS, but she's been wanting her own. So I stroll into Gamestop planning on getting her one, when I see that they have Wiis on sale. Hmmm... the kids have also been asking us for a Wii, but we figured we have too many games at home. Out of curiosity, I ask the guy how much the DS is and how much for the Wii. Wii = $120, DS = $150. What?!?!?! The Wii is cheaper than a DS!!! So I went with the Wii. I also picked up the New Super Mario Bros game which I know she would love since she plays it when we're at Target or Gamestop.

So I venture home, wrap it, and hand it her. She is happy with her Wii! I hook it up and I started setting it up. I did have a difficult time with synching the controllers. I wasn't sure exactly how to do it but since I'm so used to the XBOX 360,I figured that it would work in a similar fashion. Once the game started and I got both controls working, the kids played on.

I'm really liking this New Mario Bros game. It's old school roots are definitely there but the multiplayer mode has a completely new twist: you play simultaneously. Whereas the old game would allow one player to play at a time... this one will place the players (up to 4) all on the screen at once! It makes it that more challenging, and fun, to play with a friend and get through a stage as a team. I also think it's a great tool to subtly hint at teamwork. Especially for young ones that still don't grab the concept of working together for a common goal. It's completely different than the "wait my turn" approach that many of the previous Mario titles thrived on.  It's a fresh idea that makes for a more enjoyable experience.  Especially for those with family members that are willing and ready to take on video game challenges.  lol 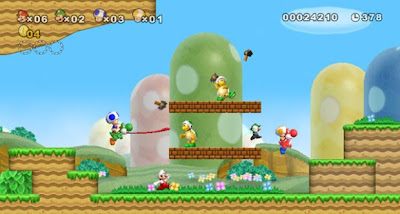 I'm still new to whole thing and am working through the settings to see what I can do with a Wii. I'm under the impression that it is online compatible... but I don't think I've set it up yet and I haven't seen where I can create profiles for myself and the kids... I guess once I start clicking on buttons, I'll find out how. lol So... any suggestions on any bad ass online games? If so, let's hear em. I'm down for some online competition! Until then, later!
Posted by Metallman at Wednesday, July 07, 2010