Is Final Fantasy XIII Too Difficult? 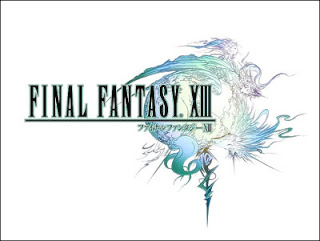 FFXIII introduces a new battle system which emphasizes on strategy more than the accustomed "menu-select action-wait your turn- Active Time Battle" system.  Since the days of the NES version, fans grew used to having an enemy wait until you've inputted your commands before the battle starts, and with FFXII, they introduced a more "active" battle where you were allowed to move your character during battle, but the stopping of the action was still present while you were allowed to access the menus and select commands.  In FFXIII, there is no stopping of the battle while you select commands.  This is a huge shift for most Final Fantasy fans and from what I see, many are having a difficult time adjusting. 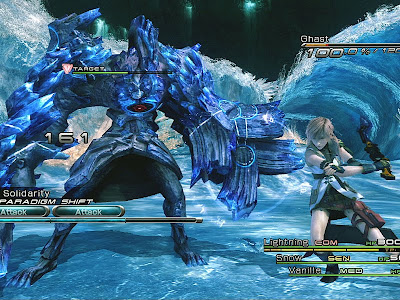 Because the action is continuous, you must be quick in selecting commands.  Another aspect that makes the game more difficult is that you no longer can control the actions of your party members.  You are responsible for your own character and hope that your team will take the appropriate actions during battle.  Now...  not all is left to chance.  You do select a paradigm (which is the equivalent of jobs) for each character and that character will take that role and act accordingly.  A three paradigm set can include a medic, commando, and ravager (other paradigms are also available but to simplify things, I'll only mention these three) which would be the equivalent of a white mage, knight, and black mage respectively.  The difference in FFXIII is that you'll only be able to command one of the characters and hope that your party members fulfill their roles.  This method involves more strategy than just being stronger than your enemy and pummel it to death and in my eyes, it creates a more realistic battle where your team goes in for the attack with specific roles.

Now, I'm still in the "honeymoon" stage of the game where the battles are not too hard, but not are easy either.  I'm not at the level where gamers are complaining of the difficulty.  Nevertheless, I feel as if the shift in the battle system is what irks them the most.  They can no longer go into a battle and then act accordingly.  FFXIII forces you plan your method of attack BEFORE you head out into battle.  If the game does get difficult in the up and coming chapters, I'm looking forward to the challenge!  But until then, later!
Posted by Metallman at Wednesday, June 09, 2010