Hey there. I'm an avid NBA fan. I watch the games all the time and I especially make note to NOT miss the NBA playoffs. So far, there have been some very entertaining series. Oklahoma City gave Los Angeles a good run for their money, LeBron was bounced from the playoffs yet again, The Suns swept a superior team in the Spurs, Orlando looked every bit of the part of a championship team until they ran into the Celtics. While last year's playoff theme seemed to showcase an "inevitable" LeBron vs Kobe NBA Finals, this year's theme seems more in line with the Lakers avenging their loss to the Boston Celtics. 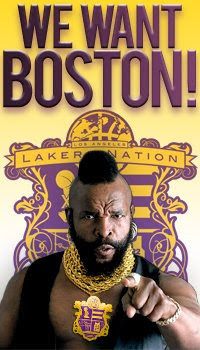 We all love story lines, the NBA is no different. Last year, the story of LeBron vs Kobe was derailed by Dwight "Superman" Howard and the Orlando Magic. The Lakers ended up beating Orlando for the championship. The year before that, the story was of the great rivalry of years past between the Lakers and the Boston Celtics, two of the NBA's most winningest teams. Boston embarrassed the Lakers and took home the crown. This year, no one is giving the Suns much of a chance against the Lakers, and as the Lakers have proven in two games, they are simply the superior team in the series so you might as well pencil them in for the finals. As for the Magic and Celtics, Boston has taken a surprising 2-0 lead in their series and the Magic are looking very vulnerable. Whether it be the Magic or Celtics to go up against the Lakers is yet to be determined, but either way, it will be a compelling series. Are the Lakers ready to avenge their NBA Finals defeat against the Celtics? Or will the new kid on the block, Dwight Howard and the Magic, come back to get another crack at the Lakers for a championship?

While a rematch with Orlando would be intriguing, you always want to avenge losses so many Laker fans, including myself, are hoping for a Lakers vs Celtics series. Either way, the NBA Finals is shaping up to be one hell of a series waiting to happen. Until then, later!

PS: If you want to know why the Suns and Magic are getting their butts handed to them, check out Jason Whitlock's article.  The man is pure genius and tells is like it is.
Posted by Metallman at Thursday, May 20, 2010