Hey there.  Tonight we're off to my comadre's birthday party.  We're some fun loving people and we like to do things a little different.  Considering that Alice in Wonderland was remade and she's a huge Johnny Depp fan, she decided that she's throwing herself an Alice in Wonderland theme party.  Who's being who was decided long ago and it turns out that I was meant to be one of the guards.  The card guard, I suppose.  lol  So today, I started on my get up.

I saw that we had this cardboard thing that came as cover to our young one's floor mat thing.  It looked like something that I could use, so I cut a hole in it for my head and decided to use it as some sort of armor.  I drew a spade on it and pasted all sorts of playing cards on it and I must say, it doesn't look too bad for something I mad on a whim.  Check it out. 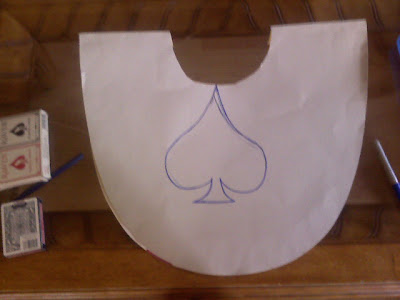 Then, I realized...  These guards have spears!  Well, at least the OG ones from the original Alice in Wonderland did.  I haven't seen the remake so I don't know how the guards come out in the film.  I don't have a spear...  BUT I DO HAVE A SWORD!  So I texted my comadre to make sure was cool with me taking a sword to a party.  I wouldn't hurt any one with it, but it is considered a weapon and well, you know, I wanted to make sure she would be comfortable with me taking it.  After she said that would be awesome, I took a pic.  Lo and behold... 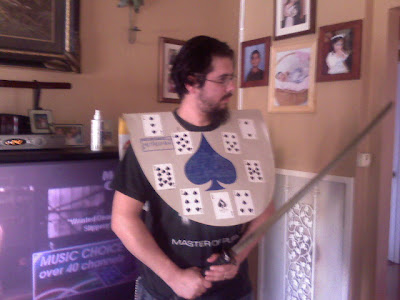 Don't I look heroic?  Not too bad, right?  lol  My wife plans on going a flower.  She's gonna put in a few flowers in her hair and wear an Alice shirt that she has.  It would have been cool if she would have gotten the Queen part.  Then I'd be guarding the Queen all night long, but you know what.... there's nothing wrong with standing guard over my precious flower.  I'll try to take some pics tonight and post a few.  Until then... Later!
Posted by Metallman at Saturday, March 20, 2010