I Have an Issue with Spam Comments 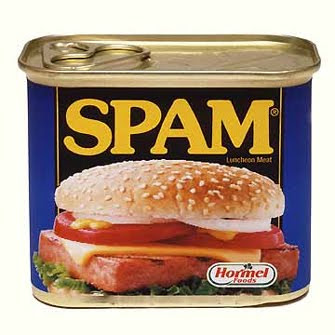 Hey there.  One goal of writers everywhere is get feedback on their work.  Whether it be constructive criticism or a pat on the back.  As a blogger, I love to see comments.  It tells me that someone out there actually took the time to read the stuff I put up and was more than willing to throw their two cents in.  My problem?  Spam comments...  I HATE receiving Emails letting me know that I have received a comment but when I read it, it's completely unrelated to the post.  Case and point...  I started Funny Fridays here this past Friday.  I posted a video that I thought was pretty hilarious of people being punched (SNL skit).  Here's the gem of a comment that I received on that post:

WTF?!?!?!  Someone please explain to me what people getting punched has to do with Lord of the Rings?  And that's not the only comment I received... If you browse through the comments of posts, you'll see some pretty long comments on unrelated crap.

The bad part is that Firefox will not allow me to delete the comments (for unknown reasons), but Internet Explorer will.  I refuse to use Internet Explorer...  I just can't go back to that atrocity of a web browser...  So my question to you, friends, is how can I eliminate, or at least minimize my spam comments?  Is there a widget?  Some kind of script that I should add?  Do I need to alter my blog template? I would rather get feedback from fellow bloggers to get a better understanding of how you guys get rid of or eliminate spam comments.  Suggestions?  Thanks.  Later!
Posted by Metallman at Monday, February 22, 2010