Hey there.  I've been MIA as of late.  I try to keep this blog updated to the tune of about a post a day.  And even though we've had events go down recently, I just haven't had the time to collect my thoughts and put them down.  So instead of organizing them, I'm just going to write them down and leave a quick comment. 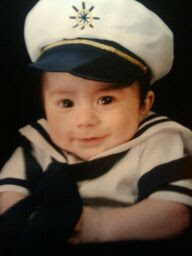 First off, what a game between the Vikings and Saints.  It was definitely one of the most entertaining playoff game that I have ever seen.  Even though I did catch it at a later date.  Why is that? Well, because we went and took pics of my little one.  He's been growing so fast that he's wearing outfits only once before they no longer fit.  My wife was able to obtain an outfit that her youngest brother wore and we went with that outfit and a sailor suit for our boy to wear.  Here's one of the many pics.  Does my baby look spiffy or what?  lol

On a darker note, my cousin went missing for a few days late last week.  Now, I don't know the complete details of what went down, but from what my aunt told me not too long ago, my cousin (19) lost his job and that it might have pushed him over the edge.  He was not heard of for 2 days and then when he called my aunt for her to pick him up, he was extremely emotional.  To the point where he cried all day.  Once the crying stopped, the "weirdness" happened.  All he could talk about was how he owned everything and everyone.  How he even owned god and the devil and that he has all the riches in the world.  Kinda delusional, no?  But it gets weirder.  According to my aunt, he was hell bent on getting to church.  He just had to go to church for some reason that he would not state.  My cousin would laugh hysterically and state that he's been talking to my father (who passed away almost 20 years ago) and his nina (who passed away approx. 5 years ago).  On top of that, he's been talking to god as well.

It seems to be all of a sudden but as I was talking to my aunt she remembered a time a few weeks ago when my cousin walked into his parents' room and just gave them a huge hug.  It was odd to them that he would do that without asking for something.  My aunt was sure that he was going to ask to borrow the car or ask for some money, but nothing was asked of.  Thinking back on it, my aunt believes that maybe that was the start of it all.  Then, his younger brothers and sister claim to have heard him talk to himself and laugh hysterically by himself.  We now believe that maybe him losing his job may have pushed him into having some sort of nervous breakdown.  He's currently in the mental ward of the hospital for observation.  We plan on visiting him tomorrow.  Hopefully, I'll have more news on what's going on then.

So yeah, I've have my posts that need to get done, but my mind has just been occupied with other things.  Maybe this is what I need to get my head on straight.  A means to write down what's going on and clear my head.  I mean, that is what a blog is for, right?  Until then... Later.
Posted by Metallman at Wednesday, January 27, 2010