An IZEA and Jones Soda Thanksgiving

This is a Sponsored Post written by me on behalf of Jones Soda. All opinions are 100% mine.

Hey there friends. A week or so ago, I was privileged enough to receive a little green box with a IZEA written all over it. I was excited. It is my first,of what I hope is many, freebie gift packs from SocialSpark and IZEA. I open the contents and am glad to see that I have been a cool turkey hat and a bottle of Tofurky and Gravy Jones Soda . The soda intrigued me so. I've never heard of Tofurky and gravy flavored soda and I was even more impressed to read the label and find out that the whole bottle of soda contained 0 calories. That's pretty healthy for a soda. I cracked it open and gave it a sip.

I must admit that I was pleasantly surprised.  There have been some great flavor combination in the history of mankind.  Peatnut butter and Jelly, mashed potatoes and gravy, and turkey and gravy to name a few great ones, but not many people like gravy all over their turkey, I do, so I was pretty stoked to taste the flavoring in soda form.  Too bad that some of my vegetarian friends have not experienced such a flavorful combo.  This is another reason why Jones Soda is so great.  It is 100% vegan! 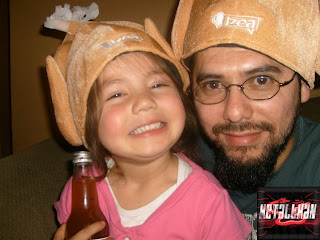 I have a friend that is vegan and has yet to experience the gravy and turkey experience.  I plan on sending him the extra IZEA package that I received.  Did I not mention it?  I RECEIVED A SECOND BOX!!!  I'm not exactly sure how that happened but the very next day, after I received my IZEA package, I received a second one with the same contents.  I plan on sending him that second box so that he can taste for himself the Jones Soda experience and have a nice keepsake from IZEA, the people that made it all happen.