We Are Getting a Kia Sedona

Hey there. Yup, they were all out of Mazeratis so I had to settle. lol We have a friend that we go to for all our car needs. The guy has our complete confidence when it comes to getting us a vehicle that we need and at a great price. My wife got her 2 previous cars from him, and they both ran perfectly. My mother in law got her car from him, and she's had no issues with the car, and my brother in law got his first car from him as well and again, absolutely no issues.

So you ask, "big deal. You're supposed to have no issues when you buy a car." Well, he's the deal, the cars he sells are all salvaged. Yup, that's right salvaged vehicles. Now, I usually would not recommend getting a car that is labeled salvaged since you really don't know what went down with the car, but our friend here has been in business for decades and not once has a customer come back and say he's given them a lemon. That's pretty damn good considering that he's the one that does all the body work and paint. You pretty much go to him, tell him what you are looking for and he'll try to get a vehicle that matches what you need. He won't get something that he doesn't believe he can fix and he won't get any make that he deems crap. 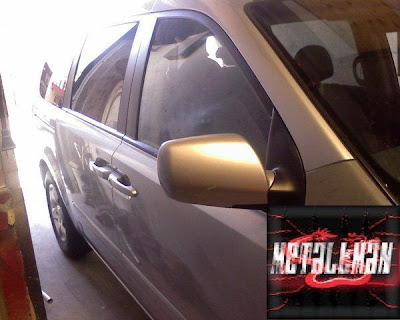 We told him we needed something roomy. We were shooting for a Mazda MPV or a Nissan Quest. He told us that the Quests were crap. Since they came out, he's seen many of them come in for repairs for all kinds of manufacturer screw ups. So we scratched that out and he said he'll try to get a MPV or something similar. He ended up getting us a 2006 Kia Sedona. As you can see from the picture, it does need a paint job and the damage was minimal. All it needed was a head light and the front bumper. Our car can be ready for pick up by the middle of next week. We can hardly wait. The car we have simply cannot accommodate a family of 6. We just dont have the room. With the Kia, we can't complain that we do not have any room. Until then, later.
Posted by Metallman at Friday, October 16, 2009

Email ThisBlogThis!Share to TwitterShare to FacebookShare to Pinterest
Labels: Family