Hey there. My wife and I watched the movie The Hangover this weekend. Word on the street was that it is one hilarious movie. So it got our interest and we sought it out to watch. I thought the movie was hilarious. I was laughing throughout the film at it's stupidities while my wife was practically falling asleep while watching it. She didn't find it as funny or as good as I did. Later on in the day, as I was flipping through the movie channels, Step Brothers was on. I said, "Oh, Step Brothers" and my wife goes, "Again... You and your brother like retarded* movies." She didn't find Step Brothers too funny either. I asked her which movie made her laugh more than 3 times and she said Elf. lol 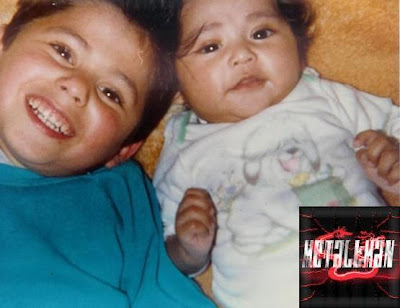 My bro and I, laughing it up since the mid '80s

My bro and I are goofballs. We quote, if not act out, funny parts of movies all the time. I just sent a Twitter message to my bro about what my wife said and his response is that the movies we like are "witty" and "smartass" type. lmao We can go on and on about movies and the funny lines in them and literally end up in tears from the laughter no more than 10 minutes into the conversation. Or sometimes its just randomly shouted out to start a conversation. It's not uncommon for my brother to walk in a room and go "I'm singing. I'm in a store and I'm singing!" LMAO The movie that we're stuck on right now is Step Brothers. We'll send messages back and forth quoting the movie. Great lines such as:

"I have a belly full of white dog crap in me, and now you lay this shit on me?"
"Look... we can bicker about this night, but what's done is done Dad. Are you guys going to invest or not?"
"Mom, I honestly thought I was gonna be raped for a second. He had the craziest look in his eyes. And at one point he said, "Lets get it on.""
And... "You have the voice of an angel. Your voice is like a combination of Fergie and Jesus."

Oh man... And this isn't a new trend. We've been doing it since we kids. Dumb and Dumber used to get us cracking up all the time. Ace Ventura and Austin Powers were other characters we quoted and acted out constantly. Oh man.. Good times, good times. I don't doubt if The Hangover takes the new spot as the movie we go back and forth on. This movie has some pretty hilarious lines like:

"I always wondered why they were called roofies. Cause you're more likely to end up on the floor than the roof. They should call em floories."
"Oh, you know what? Next week's no good for me... The Jonas Brothers are in town. But any week after that, it's totally fine. "
"Now remember, what happens in Vegas stays, in Vegas... Except herpes, that shit will come back with you."
"I didn't know they gave out rings at the Holocaust."

So what about you guys? You guys have a quirky characteristics like my bro and I? Any crazy antics between yourself and your siblings? We always manage to get someone laughing. Sometimes we're the only ones laughing because of our sense of humor. lol When is the next stupid, funny planning on coming out? Until then, later.

*If I offended anyone by my use of the word retarded. I'm sorry. Don't mean to offend anyone by it and it's used in no way shape or form to put down anyone.
Posted by Metallman at Tuesday, August 25, 2009