The Oakland Raiders and The Michael Vick Signing 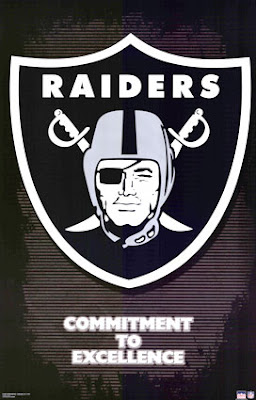 Hey there. I'm a huge football fan. I follow football and all news that is football. I had my Heavy Metal Rankings last year that took a lot of time to compose, but I'm bringing it back this year as a top 10 list as opposed to a league wide ranking system. Yesterday was the first preseason game for my team, the Oakland Raiders. I've been a fan since forever and I was looking forward to finally see my team in action. Even though it was only a preseason game and the starters would not be on the field for the full 60 minutes, it provided me with a sense of, "YES! Football!" lol I hate, HATE, the summer months. Not only does the heat get to me, there's no sports to watch. Sorry people, but baseball is such a bore to me that it's not even considered a sport in my book. Once the basketball season is over, there isn't a sport out there that will get my adrenaline going and no reason to have some guys over for a game and a few brews. So to see my Raiders on the screen and kicking some ass was definitely welcomed.

I love what I saw. The timid JaMarcus Russell that started for the Raiders last season is gone. Last night's Russell was consistent and poised. He stood in the pocket, he didn't eye his receivers through the whole route, he looked left and right scanning the field well, and even ran for a good 18 or so yard run. This is the QB that will take the Raiders places. Not the guy from last season that made it easy for the defenses to read and take apart. The Raider team as a whole looked real good. They spoke confidently and walked tall. They look like a team to be reckoned with. The running backs were superb. Especially Darren McFadden. And considering that we have three strong backs in Fargas, McFadden, and Bush, we should have a very strong running game that should soften the defenses up for Russell and his receivers. Speaking of receivers, Chaz Schilens looked outstanding. Last year, Russell looked for his TE Miller for completions but Russell looked comfortable passing to his WRs. We even saw a few bombs launched by Russell to rookie Darrius Heyward-Bey. I believe that once the timing between these two is right on, they are going to be a deadly combo. Heyward-Bey has speed and Russell underestimated his speed and he under thrown the first pass to him and on the next, he over thrown the pass. One thing is for sure, the Raiders are looking very capable of making some noise in the AFC West.

The Raiders were not all offense either. Their defense stepped up and stopped the Cowboys in goaline situations and the Cowboys were never really in rhythm. The only touchdown for the Cowboys came on Romo's last drive of the first quarter. Michael Huff even came up with an interception and there was constant pressure on the Cowboys QBs. Their run defense is better, but still needs some work. That's the one of many areas that coach Tom Cable has addressed to his team. The Raiders look like a team that is listening and their look and demeanor convey that. The Raiders are finally moving on the upswing and showing the commitment to excellence that owner Al Davis has been preaching for decades. Preseason game or not, when your team can put a 31-10 beat down on your opponent, you are doing something right.

Now, on to Michael Vick. While driving home from work, I started listening to ESPN Radio, in hopes of hearing about the Raider game, instead I hear about the breaking news... Michael Vick signs a 2 year deal with the Eagles. We all know the story of Mike Vick by now. The guy ran, or funded, a dog fighting ring where many dogs were seriously injured and killed. He claimed that he didn't know it was wrong since he grew up around dog fighting rings and what not. The man paid his debt to society and spent almost 2 years in jail. The commissioner, who I believe is doing one hell of a job, conditionally reinstated Vick, allowing him to sign with a team, but not play in a game until the commissioner makes his final decision on whether or not to fully reinstate Vick. 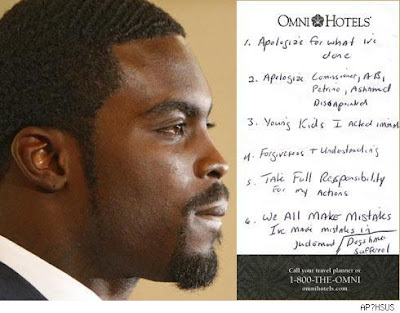 Many fans are divided on the Vick signing. Some strongly feel that he should not be allowed to play, others feel that he should deserve a second chance. The one thing that is going for Vick is that he has Ex-Indy coach, Tony Dungy as a mentor. Tony Dungy is a class act guy. Everyone respects him and when he talks, players listen. Having Tony by Vick's side made his signing possible. Let's face it, the Eagles signed Vick, knowing that he is under the watchful eye of Tony Dungy. If Vick did not have Tony as a mentor, I do not believe that he would of signed with any team.

Even the Eagles owner did some "soul searching" before approving Vick's signing. I praise the owner, not for signing Vick, but for having the stipulation that if Vick is not proactive in anti-dog fighting campaigns, then his tenure with the Eagles is done. That takes guts. Imagine your boss coming up to you and says that you'll be fired unless you spend a good 10 hours a week at the local YMCA for community service. Many of us would say hell with that, not because we don't want community service, but because we know that we can get another job elsewhere that will not require us to work an extra 10 hours a week without pay. Vick does not have that luxury. The Eagles' owner is making it known that Vick MUST work for his spot on the Eagles and you have to give him huge praise for that.

People make mistakes. And those of the criminal kind, pay their debts to society with jail time and then are released back into that same society without any guidance what so ever when they have paid their debt. It's difficult to be reinserted without guidance. Looking at a job application, it clearly asks if you've been charged with a felony and if you've been in jail. They claim that the information will not be taken into account when the job decision is made, but let's be real. If it will not be taken into account, then why the hell would you ask? Just to know? It's BS, if you ask me. Imagine Vick trying to get signed by a team without someone with credibility backing him. He wouldn't be able to do it. They'll look at him as a criminal, someone that's a liability to himself and their team. But because he has Tony on his side, teams can see that he's on the right path. He's being guided by a man that the NFL highly regards as it's personal Jesus. If you have Jesus backing you up, that stigma of a criminal does not have as much weight as it had before. Mike Vick should be thanking his lucky stars that Tony Dungy exists. If not for him, Vick's career would have been over in 2007. Tony Dungy will not allow his name to be tarnished by Vick. If Vick screws this up and blemishes Tony Dungy's name, Vick will have truly committed the ultimate crime and should forever be labeled as the biggest screw up in NFL history. Later.
Posted by Metallman at Friday, August 14, 2009