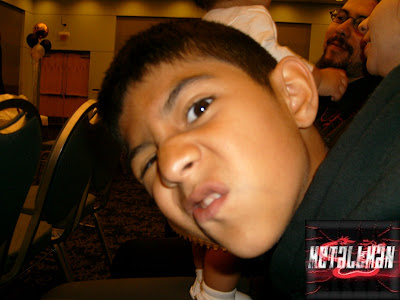 Hey there. We've decided... Our son is going to camp. A friend of ours presented us with an opportunity for our boy to go off to camp and learn a few things. My wife and I briefly talked about it before deciding that he's going. I've never been to any kind of camp as a kid and my wife says that she went to a "fake" camp for a week. lol I think this will be a great experience for him to get out and do something while he's on vacation.

Our boy can be timid, but at the same time, he can be very outgoing. We feel that sometimes he's just not in the mood to play with others and would just rather stay in his room. Reminds me a lot of me when I was young. lmao The difference, though, is that while I was out, I was out playing with kids and doing stuff with friends. When our boy is out, he's either sitting by himself playing video games or sitting there looking bored as hell. Mind you, this is not all the time. There have been occasions where he's out and about playing with other kids and he practically disappears until it's time to go. We figured that maybe camp would be a good way to help make a dent, if not break, this shell that he hides in at times.

We spoke to my son during our lunch break to get his thoughts on the whole thing. I talked about camping and what not to see if they were activities that he would enjoy. He said that they were cool. So I mentioned a camp for a week, and he shot it down, saying he wouldn't want to go. I told him that he just said it sounded like fun so why would you not want to interact with other kids his age and do fun activities? (This is that shell I was talking about) He couldn't really answer me so I told him that that is the very reason he is going to camp. He should want to go out and have fun with kids his age instead of passing up these life experiences. I never got to go to camp and I would have loved to have gone. He didn't seem to receptive to the idea that he's going, but I have a feeling it's because he won't be able to play video games. I'm sure that once he's there, he'll have a blast and one day, many, many moons from now, he'll look back on that thank us for giving him that experience. Until then, later!
Posted by Metallman at Tuesday, August 04, 2009