Hey there friends. Football season is fast approaching. We've already had a few good looks at most NFL teams in preseason action and the anticipation is building as the season opener is approaching. Most football fans are scrambling to get their fantasy football teams together before the season starts. I've been playing fantasy football for years now. I've tried different leagues from different places since I haven't been able to find a league that provides the ultimate experience in fantasy football. After signing up and trying WaiverWire, I believe I may have found my home.

After going through the packages that they offered, I went with the appropriately named, Stimulus Package, that is 100% for the 2009 season. That's a savings of $20. Here are all the perks that come with it. 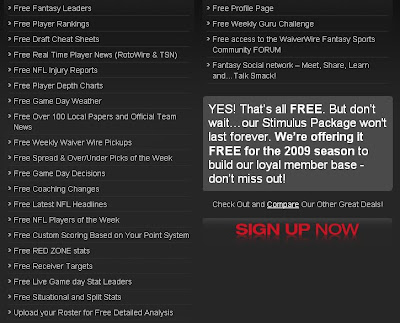 That is a lot of information for a free site. Many other fantasy football sites do not offer anywhere this amount of information. Being a guy that loves numbers (profession: credit analyst) I love being to get all sorts of information from a single source.

WaiverWire.com is brought to you by some former Wall Street guys that love football. Say what you want about Wall Street, but if someone is going to analyze football for me, I'm going to want the guys that did analyzing for a living. 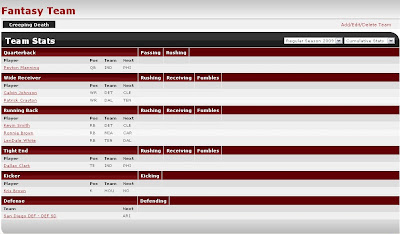 I went ahead and entered my fantasy team into their database and started my research. There is so much information to digest. Projections, odds, player information, team news, player stats, etc. etc. It simply has everything you need to build and research your players so that you can make the best choice for the week. The projections tab is especially useful for this task. Who do I start? Peyton Manning or Matt Schaub? You can go to the projection tab and compare the players and make the best choice for the week. I love this feature!

And when you're done with all the researching for your team, you can stop by the Guru Zone for a weekly challenge. This is definitely my favorite part of the site. WaiverWire provides you a chance to gain Guru Points which is a way to display you're football knowledge by taking part of it's weekly challenge. Who do you believe will gain the most yards? Most TDs? Cover the spread? You submit your answers and points are awarded depending on correct predictions. It's for bragging rights amongst other WaiverWire members. My Guru Status is a big fat 0 but I'm hoping to improve that number as the season goes on.

I spent a good amount of time going through the player news and team statistics. I went through most of the players on my favorite team, Oakland Raiders, to get a better grasp of what's going down with them. I'm reading good things on them and I hope that they come out on top of their division. I'm also reading up on them since I like to have a few players on my fantasy team from my favorite team. As you can see from my autodrafted team, I don't have any OAK players. It's OK, though. I'm planing on claiming their defense and WR Schilens on my team. I play to win! But I also try to stay loyal to my team and I'm not showing much loyalty if I have the SD defense on my side. lol

Sign up at WaiverWire today and take advantage of all the information that is readily available to us football fanatics. Make sure you look for me to add me as a friend for some friendly competition and trash talking among some football lovers. See you there! Later.