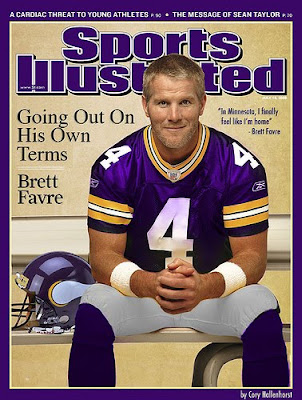 Hey there. It seemed that it was more of a matter of "when" instead of "if". Well, today is the "when". Even though reports claimed that Brett Favre called it quits for real this time, he has gone out and signed a deal with Minnesota. His signing is no more than a few hours old and he's already in pads, practicing with the Vikings. What does this mean to the football world? One of many things. Are we going to be blessed and see one of the game's greatest QBs make a gallant effort to end his career on top? Are we going to see "Old Man Brett" hanging on my his last thread just to make it through the season? What does this mean to fantasy football players? Will you trade to start Brett? Will Adrian Peterson get his now that Favre is in the lineup? It's exciting, I'll admit, but it's hard to look forward to seeing The Legend in action when we've seen him have extreme highs and extreme lows these past couple of seasons.

His first retirement was heart felt. I remember seeing him weep at his press conference. It made me feel somber knowing that one of the best QBs in the game is retiring. It made me feel old to see a player from my childhood hang up his cleats. Then he came back, and then retired, and then came back again. I'm not a Green Bay Packers fan, but I am a fan of the game and of individual players. Naturally, I want to see the best players on the field. That's the only way we're guaranteed great football, but if Brett's time is up, he may regret this move. Viking coach Brad Childress better hope this gamble is worth the risk. His job hangs on Brett Favre's arm. I don't want to see him fail, but if Favre fails, not only will Childress look foolish, but so will the legend of Brett Favre. Later.
Posted by Metallman at Tuesday, August 18, 2009