There's Something Wrong with Esther 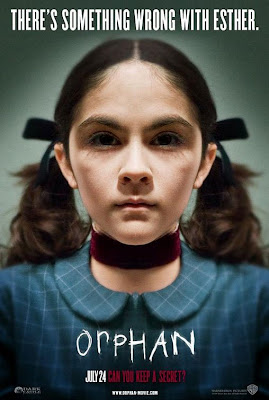 Hey there. How can you NOT want to see this movie? I'm a horror and thriller film buff and there is just something about this flick that has caught my attention. The advertising for this film is spot on. Everything from the tag line "There's something wrong with Esther" to the freaky ass posters all over the city. I'll be driving by and out of the corner of my eye, I see the movie poster and it's Esther, giving me a stare down. It brings shivers to see a child with such a cold stare.

The movie comes out in theaters today and my wife and I are going to try and catch it this weekend. We don't really go out to the theaters as much as we would like. I want to say it's mostly because we don't see many movies that catch our attention. Even if they are movies for the kids, if they don't seem to excited about it, we don't see it. Well, not until I can rent it on Netflix. lol I'm kinda glad that the kids are leaning towards my love of fright. I've caught them watching Ghost Hunters on TV and the little one always asks if the movie we're watching is a "scary movie". If we answer yes, she tends to stick around and watch. lol I don't mind the kids watching stuff like that, as long as it's not overly gruesome or violent. There's no way they'll be watching Hotel or Turistas or anything like that.

Anyways, The Orphan somewhat reminds me of other films in which the child actor is NOT portrayed as innocent. Such great films as The Omen, where Damien is the son of the devil, or The Good Son, where Frodo and Macaulay Culkin represent good and evil respectively. Both of these movies hangs the question, "What would you do if it was your child?" I have a sense that The Orphan may follow suit and ask that question to the reader. From what is shown on TV, the film doesn't seem to go for cheap scares, so it's natural to assume that psychological and ethical questions are going to drive this film. If we get a chance to see this, I'll definitely be posting my comments and thoughts on this film. Until then, there's something wrong with Esther.... Uh, I mean, later. lol
Posted by Metallman at Friday, July 24, 2009