Hey there. This weekend, my wife and I treated ourselves to a movie. My wife is not a horror buff. She's not one to go out and look for a "scary movie" to watch and any film of that nature that she does watch is because I wanted to see it. One such film is Orphan. I was captivated by the movie posters and commercials and I knew that I wanted to catch this film. An opportunity presented itself this weekend while my mother in law watched the kids.

I must admit that the advertising for this film sucked me in. As previously stated in this post , I asked the question if this film will follow suit of other films like The Good Son or The Omen. The advertising definitely made it seem that way, with the majority of it focusing on Esther and her "secret". Upon seeing the film, I am glad to say that the movie wasn't so much about Esther, but just as much about the family in the film.

The film is a refreshing in the sense that it did not follow the typical format of a horror film. A typical horror film will showcase the antagonist killing off various characters in the film, while the protagonist goes about and discovers the identity, or weakness, of the antagonist. While the film does have it's path that will label it as horror, the film really shines when it comes to the actors and their portrayal of the characters. It is great to have a film where the characters are well developed. You feel for these people as for what they have gone through by the brilliant acting. You have the cheating husband in John (Peter Sarsgaard) that tries to wrong his right, you have the ex-alcoholic mother Kate (Vera Farmiga) who continues to battle those demons, you have the over zealous and negligent son Daniel (Jimmy Bennett), you have a partially deaf child Max (Aryana Engineer)(which may or may not have been cause by her mother) and then you have the problematic "child" in Esther (Isabelle Fuhrman). This is not your happy-super-go-lucky family. This is a family that has issues and had issues before we were introduced to them. Esther did not cause these problems, she merely added on and intensified what was already in disarray. Esther's character is not so much as the "kill 'em" type as she is more the master manipulator. Such as when she hugs her daddy extra tight while staring at Daniel with a slight smirk on her face. Your first glimpse into who Esther really is. 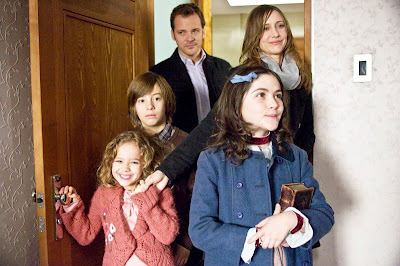 The script is so well written and the characters so well played that the film earns a great rating on that alone. Being that this is a horror film, you do not generally see great acting and horror in the same sentence, yet this film pulls it off beautifully. Not to mention to the great cinematography. The camera angles are perfect and the scenery only amplifies the senses. As Esther walks down the cold, icy snow, it doesn't help but illuminate that cold, stark stare that Esther does oh so well. Another great shot that showcases such control of her facial expressions is that during the hospital scene. As Daniel is fighting for his life, due to Esther's misdeeds, she puts on her sweet child act to her grandmother. Once she receives the money to go get a soda, she gets up and walks towards the hallway. A beautiful smile crosses her face, as any child would have after getting what they wanted, but the moment Esther walks past the window and her grandmother could not see her, the smile vanishes without a trace and that cold stare is full front and center. These are the shots that make the movie so great.

Max is another character who is vital to the movie's success. Because she is deaf, she has learned to read lips and uses sign language. Esther manipulates her younger sister to read lips and tell her what's going on when Esther cannot hear. Considering Max always wanted a younger sister, she covers for Esther when she witnesses Esther in full fledged evil. Another strong point in regards to Max is her character development. As a deaf child, you'd figure that the film will follow suit with many other films and place Max as a character with a serious disability. On the contrary, we see Max grow stronger as the film goes on. As a timid child who is shy to hug her new sister Esther, to a child that is capable of knowing that her mother's life is in her hands and is firing a pistol. Another great aspect that was very well played by the filmmakers are the silent scenes. Max wears a hearing aid, since she is partially deaf, and when we see that she takes them off, the film goes silent. This is used to GREAT effect... Especially well done, right before Esther attempts to seduce John. 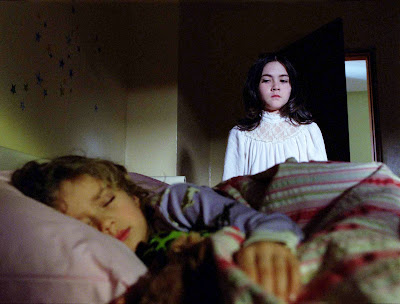 Kate's character could be considered the protagonist of the film. Some may argue that it would be Max, since Max is the character that develops the most during the film. When Kate claims that "there must be something wrong with Esther", the whole world looks down on her and chalks it up to Esther being a child in transition. She battles through her demons throughout the film and nearly relapses back to drinking. Everyone ignores Kate's concerns and she, and the audience, feel as if she is alone in her attempt to uncover Esther's past. Esther manipulates the facts to make Kate almost a non-factor until the end of the film when she is the only one left to take actions on her findings. A great scene that highlights these frustrations explodes during the hospital scene. Esther wasn't really going to get a soda, she was going to finish off Daniel in his hospital bed. Max, realizing that Esther is taking longer than needed, told her grandma that she was going to get Esther. When she sees that Esther is not at the soda machine, she runs to her mother and tells her to check on Daniel. At that moment, an emergency alarm is set off in Daniel's room, since he flat lined due to Esther suffocating him with a pillow. As the family is being kept out of Daniel's room, Kate runs off to Esther. Seeing that Esther is walking with a soda, Kate runs up to her and unleashes her pent up anger and strikes Esther, knocking her down in front of the medical staff. Great stuff!

This is definitely a movie that you need to see. The script is very well acted out and the tension builds slowly, but when it explodes, the climax is gratifying. It's not a disappointment (*cough *cough The Happening *cough *cough) or expected. The scene that brings it all together was original. Again, hints are scattered throughout the film and when it brings it all together, you think back at those hints. A great example of this is when Esther is flickering her black light on and off. You only see that cold stare appearing and reappearing as she turns that light on and off. Later in the film, you understand why... She was admiring her work. Being an artist, she painted with such skill that it generated much attention. Seen through normal light, they look normal. When a black light is held against them, they display a grotesque painting. Special emphasis on her "orphanage". A beautiful painting of her orphanage in Russia turned to one engulfed in flames when the black light is held against it. It was a great way to display both sides of Esther is an extremely creative way. 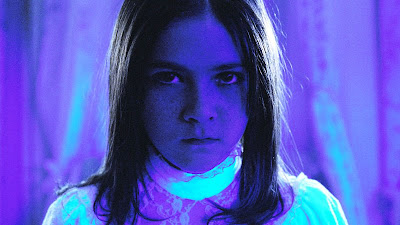 Again, I greatly enjoyed Orphan. If you are looking for a new breath of fresh air in the horror genre, you definitely need to check this out. It's a nice contrast to have a well scripted and well acted horror film. "There's something wrong with Esther", and there's definitely something wrong with you if you do not go and see this film. Later.