Lakers are the NBA Champs 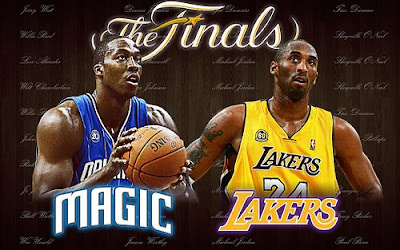 Hey there. The Lakers are the NBA champs! Hell yeah, baby!!! What a great way to end the season! After an extremely entertaining playoff run (playoffs in general were great this year), it all culminated with a Lakers' victory over the Orlando Magic. Kobe finally got that 4th ring and his 1st ever finals MVP and can finally put to rest the "Kobe without Shaq" talk.

While watching the game, you had the sense that the Magic were planning on making this a fight, but after the first half, their faces were dejected and you just knew that they were just playing the game to get it over with. It's a shame too. The Magic are an up and coming team and despite what Magic coach Van Gundy says, their lack of experience did them in. An experienced team would have the sense that the game is only half over and they have another 24 minutes to chip away at the Lakers' deficit during the 3rd qtr to give themselves a chance in the 4th. That never happened. They came out flat and without the flare that made the Magic formidable. Could it be because their leader, Dwight Howard, was plagued by foul trouble? Who knows, but that fire was not there. This series had the potential to go to 7 games. Games 2, 3, and 4 were extremely entertaining going down to the wire in each and 2 of them went into overtime. Though the world wanted to see a "Kobe Vs LeBron" match up, the Magic earned the right to represent the East in the finals and gave the Lakers a good fight. Congrats to them and their accomplishments this season. I'm sure that the Magic will take this experience and fuel that fire for next season. 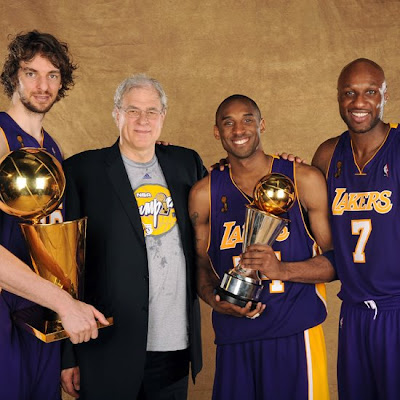 As for the Lakers, this is the team's 15th championship. The team knows nothing but success. The fans of Los Angeles expect nothing less of them. During our rebuilding years, the fans tore into the Lakers for being mediocre. A 40+ win season is not good enough and the Laker fans were letting them know that. This championship makes it all that more sweeter. For a team that rides the wave of success, a wipeout completely threw this team off track. In the '02-'03 season, I believe that the team panicked went with all star players instead of team chemistry. Kobe, Shaq, Karl Malone, and Gary Payton could bring home the gold. As great individual players that they are, they did not have the team chemistry that today's team has. This proves to me that talent is not everything in the world of basketball, but managing that talent to play collectively for a common goal. For all the grief that Kobe has gotten over the years, I think he finally understood what a team is.

This is a great championship for the Lakers and the fans. One that I will surely remember for the rest of my life. I was drawn to the TV more so than before. I, too, was nibbling at my nails in the 4th qtr waiting for it end. I didn't jump as high as Kobe did, but I was up, raising my hands in victory, as if I was part of the team. I listened in on the press conferences, watching my team speak of their journey, with a smile on my face. 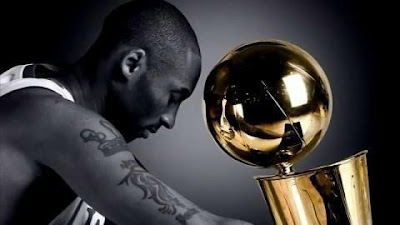 Los Angeles is not Green Bay, where a team means everything to the city. But this is a city where sports pride and loyalty is abundant. If you travel to Los Angeles, you are sure to find Clippers, Dodgers, Kings, Angels, Ducks, Raiders, and Laker jerseys abound. And each respective fan will loyally defend that club for life. A city divided amongst many teams, but never divided by their love of the sports. The people of Los Angeles are rejoicing. Now... I need to come up with an excuse to miss work and attend the Laker parade on Wednesday! Later!
Posted by Metallman at Monday, June 15, 2009