Happy Father's Day to Me

Hey there. This Sunday, many American's celebrated Father's Day. We were no exception. Sunday morning, I got up, expecting to be showered with hugs and kisses from my family. What did I get? None of that. lmao We were baby sitting so my wife asks me to go and get breakfast for the kids. Hmmm... No problem, maybe she's trying to get me out of the house to surprise me with something. So I go and at the parking lot of the market, I get a text message from a cousin wishing me happy Father's Day. I wrote back telling him the same and threw in the "you're the first to tell me that today." lol He laughed and he said he didn't get a Happy Father's Day from his kids until AFTER he got whacked with a baby bottle. lol I got home and nothing. I finally told my wife, "What gives?" and she said she was sorry. Since we were baby sitting, she didn't want to make it a spectacle since the little one wasn't around her dad. I said fair enough and let it slide.

Well, my wife had plans for breakfast, but those were quickly scratched since we were still baby sitting for my mother. We agreed to take care of her since my mother said she would pick her up "early". Well, early for my mother is around 12 PM so we lost our morning waiting for her. Once we done with our baby sitting duties, my wife gave me my gift, well, not literally, since she wanted me to pick it out. We sped off to the mall and she treated me to a watch of my choice.

Now, a watch is a watch but let me tell you something. I've never really owned a watch before. My wrists are so small, that I've never really wanted one because it would ride half way up my forearm. It looked ridiculous so I figured I would never really wear one. Complete ignorance on my part. My wife told me that you can get them adjusted to fit and again, I thought about it and figured, damn, so even after you buy a watch, you need to go somewhere else and get it resized.

Well, at the register to pay for my watch, I told the sales person that the watch is too big and she told me not to worry about it, that it will have a perfect fit before we leave. My eyes lit up. Again, ignorance on my end, but she was going to make it fit before we left. I am extremely happy with it. It's looks good, and classy and I found myself staring at it for min or two throughout the day. lol Check it out. 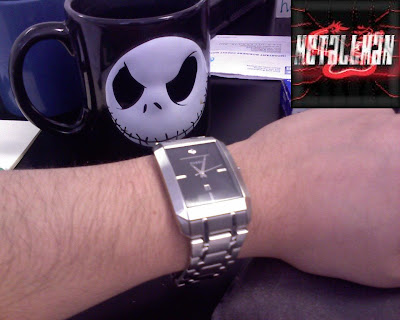 Afterwards, my wife treated me to lunch at a restaurant of my choosing. I must admit,I was thinking about the kids more than myself since I didn't want go somewhere where I know the kids won't eat the specialty. I figured, no point in going to a place like Red Lobster and then the kids order Mac n Cheese. lol We ended up going to Outback's Steak House. For the past couple of years, I've been hearing the Outback jingle on the radio and will sing it out loud every now and then to get the kids to laugh. I know that I drove my wife crazy with "He's the greatest Dynamo!" lol She pointed it out that we didn't hear the song this year and yet we went to Outback and other times when we do hear it, we didn't go. lol Looks like those subliminal messages work. lol

It was our first time there so we were not familiar with the menu. We ordered our drinks and I sent a few Twitter messages and got back some recommendations (which included bacon!!! YUCK!). Then the waiter stopped by and dropped off a wooden board with a knife stabbed into these 2 brown things that looked like potatoes. We all looked at it and wondered if it was for us since the waiter was talking to the next table when he dropped them off. I was planning on poking it but was stopped by my wife, since we weren't sure it was for us. So the next time he passed by, I said, "Guy, is this for us?" He responded with, "Yeah, is there something wrong with the bread?" I laughed. I told him it's OK that we just weren't sure it was meant for us. We ate it up, which was pretty damn good and then we scarfed down our meals. Pretty good and I recommend checking it out.

As we were leaving, we decided to skip my uncle's BBQ at his place. I figured, the kids are going to want to be in the pool and ignore us the rest of the day and it should be about me! Yeah, I got selfish like that. lmao My wife was feeling pretty tired too so ended up going home. My wife and I relaxed in bed and held each other for a bit. We watched the Dark Knight and my wife slowly drifted to sleep. Our little one soon after got up from her nap and proclaimed that I promised to play Rock Band with her and we haven't played. lol So I set it up and we played some Rock Band. I love hearing the little one sing. lol We soon after caught WALL-E and before I knew it, the day was coming to an end.

Just the way I like it, a day well spent with my family. So what's up with you guys? How did you spend your day?
Posted by Metallman at Monday, June 22, 2009