A Buffet Fit for a King

Hey there. Last night, we treated my father in law to dinner at a buffet restaurant that he loves. The place is pretty good. They specialize in oriental food but they have their fair share of seafood as well. We were a little hesitant on going there only because the kids have never really ate stuff like that and we were not sure that they would enjoy it. And to top it off, our middle child was not well (threw up the night before) and having her eat something that she's not familiar with could end up with disastrous results.

In the end, we ended up going and I walked with our middle child asking her what she felt like eating. She basically asked for pizza and fries. She didn't even eat the pizza but she did fill up on all sorts of fruit later on. Our son had himself a field day. He stocked up on ribs and he tried something different each time he "refilled" his plate. Good to know the boy enjoys seafood. He had some fish and liked the crab legs and he also had this red kabob looking meat that we had no idea what it was. All that matters is that he said it was good. lol Our little one wanted ice cream so she chowed down her food and went straight for it. lol It was funny because she was always munching on something and when anyone offered her anything, she said she wanted it. I know she got stuffed. My wife enjoyed her orange chicken. Her personal favorite. She "only" had 1 plate. We all had refills except for her. She's not a big fan of the place and usually gets a plate of white rice, pizza, and orange chicken. As for me, I had an adventure. lol

First off, earlier in the day, knowing that we were heading towards the buffet, I sent a Twitter message asking if I should be bold and try the sushi. I've never had it before and I knew that it was going to be there so I started asking myself if today was going to be the day I finally took the plunge and try it. My friends and family said to do it, with my brother proclaiming to "Eat the head!", a la Yao Ming in that T Mobile commercial. lmao

While I was filling up my plate, I saw a large shrimp looking thing that reminded me of that. 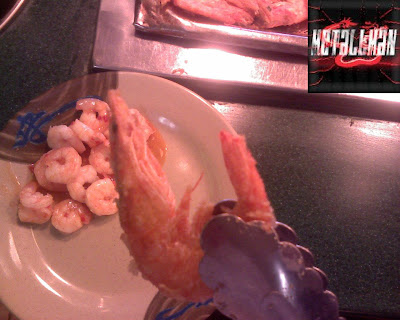 It wasn't moving so it's not entirely like the ones Dwayne Wade and Chuck B. encountered, but still... I had a chuckle over it. I ended up serving myself a plate of white rice, spicy shrimp, salmon, fish fillet, and octopus. Mmmmm... octopus. Don't tell me this doesn't look good!

Soon after I gobbled that down, I enjoyed some crab legs, beef & broccoli, more shrimp, and then it happened... I walked by the sushi. I grabbed a third plate and walked over to the sushi section. Now, I know that buffet sushi is no where the quality that sushi should be. But I figured, I might as well start somewhere and really, sushi is raw... How much more fresh can it be? As long as it's not squirming off my plate, I'm good. So I decided on the four below. 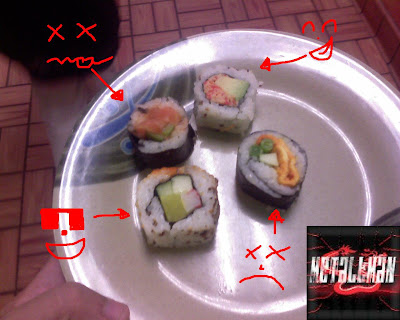 I have no idea what each one is. I pretty much just picked some at random. What I can say is that I liked 2 and not the other 2. If anyone knows the name of them, please let me know. I'm sure that if I ordered it at a restaurant, it would taste many times better so it's something that I am willing to try. The others, not so much. I'd like the names of those two and put them in my black list (which includes bacon and cooked onions). I ended my feast with a plate of pineapple slices and mango. I missed out on the ice cream. I wanted some but seeing that everyone else was stuffed, I didn't want to be only one still eating. lol Next time. Later.
Posted by Metallman at Wednesday, June 24, 2009