Hey there. I'm a game freak and glad to see that there's G4 on TV. That station has it all to appease a geek like me. Bad ass shows like X-Play Unbeatable Banzuke, Ninja Warrior, Code Monkeys, etc. But Attack of the Show is edging out the flagship show, X-Play in my eyes. While X-Play does the "nerd guy with hot chick" thing quite well, Adam and Morgan may have to step aside to the new kids in town, Kevin and Olivia. 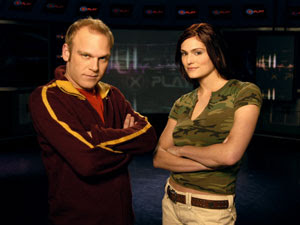 X-Play is great, when you want the latest news on video games for all platforms. Latest reviews and quirky conversations between Adam and Morgan was like a fresh of breath air for us viewers. It didn't seem that the conversations between the two were scripted so it felt like these are two people that us gamers could relate too. But, like most of you, gaming is not all I'm into. There's the anime, Comicon, and all things tech that I'm into and Kevin and Olivia is the team to go to. Not only do they have great chemistry together, but they look like they're having fun doing it. They not only give us the heads up on games, but on camcorders, TVs, cameras, PCs, the works. And I love the way those two put themselves right in the middle of the action. 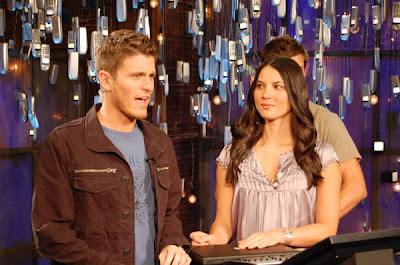 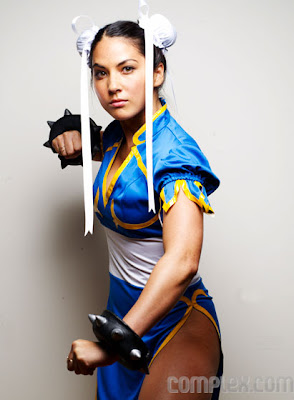 When Street Fighter 4 came out, who was there to try the game out first hand? Olivia and Kevin. Olivia went as far as to dress up as Chun Li for the event! Not only that, but the woman went ahead and dove right into the Ninja Warrior obstacle course. You know how difficult that damn thing is? My son has been hooked on that show for a few years now and he swears that he and I will one day head off to Mt. Midoriyama to one day take on the course. lol

The above would warrant any woman to part of the bad ass club, but those feats of bad assery is not enough for Olivia Munn. A few nights ago, while watching Attack of the Show, I see Kevin declaring a MEGA DARE on Olivia. lol That's right, a MEGA DARE. None of this double or triple dare crap for them. lol Anyways, the dare turned into a contest between Olivia and Kevin. The contest being who can drink the most hot sauce shots. lol Olivia took Kevin on and after the first few shots, you knew the woman was in pain all the while, Kevin gloating. She hung in there though. They handled all the shots (10 each) while the last shot was to be the tie breaker. The two actually fought for the last one before Kevin downed it for the win. lmao Yes my friends, this is the kind of shit that I find entertaining. lol Check out the video and see for yourself.

Now, after watching that. I'm declaring Olivia the winner. Why? Because Kevin, that ass, still had a shot in his hand while he fought off Olivia for the tie breaking shot. Had he been a man, he'd down his shot before going for the next one. Therefore, disqualifying him. Well, in my book at least. So here's to you, Olivia, the bad ass chick that whipped Kevin in what I like to call, "The Hot Shots of Death" MEGA DARE. For what I saw you do, was one of the most bad ass things I've seen on TV. Later!
Posted by Metallman at Thursday, May 21, 2009