Old Boy: A film of Love or Revenge 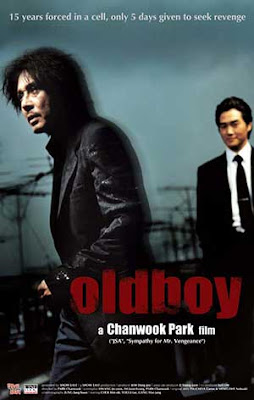 Hey there. I first caught of glimpse of this film back in October, when the Bravo network was running their 30 Even Scarier Movie Moments. Yes, the show wasn't all that great, but considering that it was Halloween time and being a fan of the horror film genre, I just could not tune it out. The film Old Boy ranked near the top 5, I believe, and I made a mental note to check it out one day. Well, that day came earlier this week.

I've stated my new found passion for the IFC and Sundance channels before. This week, they've brought another gem of a movie to me. Old Boy is a South Korean movie that will blow your mind away. It is rumored that Quentin Tarantino was so moved by the film, that he lobbied for the film to receive the Palme d'Or award during the film's showing at the 2004 Cannes Film Festival. The film is subtitled in English so the one negative thing I will saw about this film is that it's difficult to focus on the actors and their facial expressions while reading.

Warning: If you plan on watching the film and do not want me to kill it for you, then I strongly suggest you stop reading here. Go watch the film, then come back to read up on my thoughts. Thanks.

The film revolves around Dae-su, a family man with a drinking problem. One night, he is so drink, that his friend, Joo-Hwan, has to retrieve him from a bar. As Joo-Hwan phones Dae-su's wife, to let her know that he'd bringing him home, Dae-su disappears. Spending no more than 5 to 10 seconds in the phone booth, Joo-Hwan is dumbfounded at his disappearance. As the camera panned out to show the sidewalk, you get the feeling that this was not a random kidnapping.

We are then shown of Dae-su's whereabouts. He is being held captive in a hotel room. While there, he discovers that his wife was murdered, with him being the prime suspect, and his daughter was sent to a foster home. Dae-su then spends the 15 years in the hotel room.

One day, out of the blue, the hotel room door is opened. While getting some sushi, he passes out and the woman chef, Mi-do, takes him. When he awakens, he receives a call from his captor and Dae-su vows to get even. Dae-su, then goes on a mission, gathering clues, as to his captor's motives and identity. Soon after discovering that he was captured because "talks to much", he comes face to face with his captor, Woo-jin. Woo-jin, then gives Dae-wu the ultimatum, discover the reason he was imprisoned. If he fails, Mi-do, will die, and if he succeeds, Woo-jin will kill himself. Mi-do, becoming more than just a friend to Dae-su, is then held hostage before Dae-su to show Woo-jin's seriousness.

Mi-do and Dae-su pack up and stay in another hotel to avoid Woo-jin and his gang. During this brief time, they express their love for each other and end up having sex. 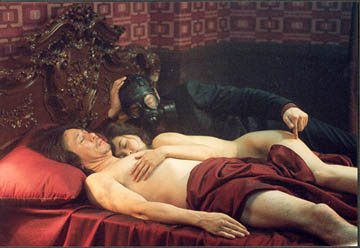 Shortly thereafter, Dae-su uncovers the motive. Woo-jin was a classmate of Dae-su back in their high school days. Dae-su discovered the incestuous relationship that Woo-jin and his sister had. Leaving town the next day, Dae-su spoke about what he saw to a friend before leaving and his friend started spreading rumors of the relationship. The rumors even got as far as Woo-jin's sister being pregnant. Shortly thereafter, his sister is found at the bottom of a dam, dead. 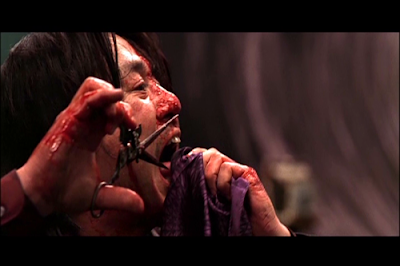 Dae-su confronts Woo-jin and tells him what he has uncovered. He then accuses him of killing his sister to hide his "shameful" secret. Woo-jin laughs it off and present Dae-su with a gift. It ends up being a Dae-su' family photo album featuring many pictures of his daughter. As he flips through the book, it is revealed that Dae-su's daughter is Mi-do. Horrified of what has become of his relationship with his daughter, Dae-su begs Woo jin to keep this a secret from Mi-do. He even goes as far as cutting off his tongue to show that he will not speak of what transpired. Woo-jin then spills the beans of his plan. His capture, his daughter, the murder of his wife, all done so that Dae-su and Mi-do would fall in love. Woo-jin expresses his love for his sister to Dae-su and calmly asks him if he can do the same with Mi-do. Keeping good on his deal, Joo-win commits suicide. 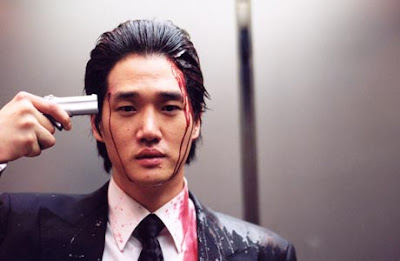 The film ends with a disturbing image. Dae-su and Mi-do are out in the snow and Mi-do hugs Dae-su saying that she loves him. Dae-su has a smile on his face upon hearing this, but that smile soon fades and transforms to a look of grimace.

The movie did leave the question, does Mi-do know of Dea-su's secret? It also left me wondering if Woo-jin is the antagonist of this movie. Woo-jin and his sister had a lover's relationship, as witnessed by Dae-su, but Woo-jin's parting words to Dae-su left me wondering if, had Dae-su not mention what he saw, would it all have been avoided? Did Dae-su, the persona that we follow throughout the ordeal, deserve what he had coming? The fact that a film will have me talking about it well after I've finished seeing it speaks volumes. This is one that you definitely need to check out.

The camera work in this film is also suberb. I mentioned facial expressions earlier because the film uses them to great effect. When Dae-su grimaces, you grimace, when Woo-jin sneers, you get a rush of hatred. It's used to great effect and should be greatly applauded. Another great effect occured during Dea-su's memorable fight scene. Over 3 and half minutes of action, all done in one shot, being reminiscent of the Final Fight video game. So I leave you with this. A video of one the longest fighting sequences in a film. Later.